“These suits are not just about NYLS and Thomas Cooley – we believe the practice of inflating employment statistics and salary information is endemic among law schools” stated David Anziska an attorney at Kurzon Strauss LLP (“Kurzon Strauss”). “We hope these suits bring systematic change in the way legal education is marketed by making transparency and accuracy the rule, not the exception.  Our efforts to bring about that change begin today.”

In addition to seeking monetary relief for current and former students, the suits seek to ensure that law schools report accurate post-graduate employment data that allows prospective students to make an informed decision regarding whether to invest in a law degree.  The suits allege that to recruit students for their programs – which cost tens-of-thousands of dollars per-year – law schools, including NYLS and Thomas Cooley, misrepresent their graduates’ employment prospects by misclassifying graduates who have only secured temporary or part-time employment as being “fully” employed, excluding graduates who do not supply information from employment surveys, and creating post-graduate “jobs programs” into which they hire their own graduates.

“We are bringing these suits because thousands of young lawyers, like the plaintiffs, struggle to purchase a home, raise a family and make investments because they leveraged their future to a law school based on inaccurate information,” stated Jesse Strauss, a Kurzon Strauss partner.  “It is time for the legal academy to own up to this problem.”

To help prosecute the Thomas Cooley lawsuit, Kurzon Strauss has retained as local counsel Steven Hyder of The Hyder Law Firm, PC, who is a 2006 graduate of Thomas Cooley.

Also, this site - Law School Transparency  - has summarized the complaints. 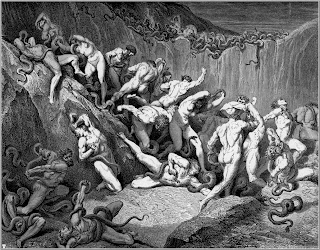 Dante's place in hell for thieves
Posted by Cryn Johannsen at 1:47 PM

awesome post Cryn. I hope this is the first of many lawsuits against the corrupt law schools.

Thanks, Turde! So glad you commented. You've reminded me that I need to add you to my blog roll.