As AEM reported last week, Thomas M Cooley Law School has filed a lawsuit against a NYC law firm and '4 John Does' for defamation.

This information caused an immediate stir in the blogosphere and was quickly picked up by a number of major media outlets. The most recent piece, by TTR, condemns the school for its hypocrisy.

In an effort to bring this situation to the attention of Michigan lawmakers, I am seeking some help from those on the Hill. I'll be heading to DC in August to represent the indentured educated class, and will certainly bring up the situation if I am granted some meetings with those offices.

One person cynically told me that these lawmakers are to blame for schools like Cooley to operate in the way that it does. Perhaps that is true. Perhaps it is false. (Since Cooley has threatened me with a SLAPP suit in the past, I will continue to remain neutral, as I have each time I've written about them). Nevertheless, I think that Michigan lawmakers, in particular, ought to know about the situation, and then they can weigh in. The former Cooley student, who is fearful that his career will be ruined if they reveal his identity, deserves that much. 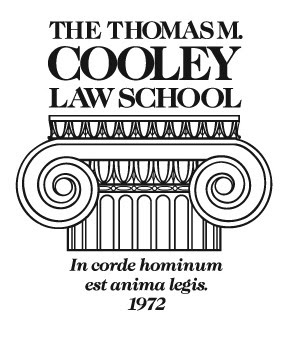 Posted by Cryn Johannsen at 2:38 PM

Thomas M. Cooley Law Sewer is an embarrassment to American "legal education" - and that is saying something!

"Finally, I would like to add that Cooley has not attempted to contact me even once, either through e-mail or through a blog comment on this post. If they had done so as they claim in James B. Thelan's sworn affidavit as attached to the Complaint, or perhaps even are willing to retract their lawsuit at this early stage, I would consider removing this post altogether."

According to the guy who wrote the Thomas Cooley Weebly article - in a message on JDU - Cooley did not even email him or post a message on his thread. They could have asked him to alter, amend, or remove the post.

Apparently, the school prefers to play hardball with a third year law student. The school may ruin this student's career - before it even starts. How is that for integrity and professionalism?!?!

I hope the plaintiffs prevail and are fully compensated for the money spent and time wasted at the Cooley School.