This new series is documenting 2000+ tweets about Sallie Mae. For the sake of providing historical evidence in its purest form, no typographical or grammatical corrections have been made.


There are a number of repeated comments, such as "get a job, just to pay Sallie Mae," "fuck you Sallie Mae," "Sallie Mae is the biggest hoe," etc., etc. Since I am seeking originality in this thread of tweets about Sallie Mae, many of those tweets have been removed from the lists collected. However, I still think it is important to post the repetitive comments - that helps the reader see a pattern. Interestingly, such comments as the ones just mentioned will be picked up and RT-ed by others. That's the nature of Twitter of course, especially when a particular tweet is perceived as cleverly sardonic, witty, funny, etc. Many will RT the remark and add something simple like, "LOL," or "I fuckin hate her too!." Women and men both refer to Sallie Mae - for obvious reasons - as a woman. The terms used are almost always derogatory. She is, as I stated already, referred to as a hoe, a whore, a bitch, etc. Many also express the desire to kill her.


Many have argued that when a product, a company, or whatever is blasted on the Internet, it does not present the most accurate picture of how that thing is really perceived. That is because many believe that the Internet is a place where unhappy people go to voice their complaints about things. There is certainly truth in that. However, when it comes to social media, especially Twitter, the emotions expressed are remarkably mixed. One finds tweets that are joyous and excited. Other tweets are completely neutral (particularly when coming from news outlets and such). There are, naturally, tweets that express angry and sadness. I have been hard pressed to find tweets about Sallie Mae that possess a positive tone.


Based upon the sampling I have collected so far, it seems easy to conclude that Sallie Mae is reviled by those who tweet about "her." So what does that say about the company's reputation? If it is such a despised company, why is it still in business? Oftentimes, a company that is hated will fail. Is that not the case with Sallie Mae? Maybe it's their cozy relationship with the Department, and their campaign donations . . .


In any event, here's the next bundle of tweets. Enjoy!


11. Worst UI on a web site I've seen: Sallie Mae's entire login and messaging system. When your customers are captive, who cares?

12. What's college for again? I think I forgot all I remember is sallie mae and less pay

13. That boy grandchildren will be paying sallie Mae back for his ass

16. I hate you, Sallie Mae. You montly gold-diggin' bitch.

17. Oh, hey Sallie Mae. You want me to pay you back? Can you offer me a well-paying job to work off my debt? Because nobody else can. #afriend

18. just paid $700 in interest on my student loans.. my bank account is screaming!

19. I went to college to be successful.. Being in debt wasnt part of the plan”

21. Even more depressing when Sallie Mae is still hunting you down years later.

25. Sallie Mae is the leading cause of death in Americans aged 18 and up.

26. I hate Sallie Mae. With every fiber of my absolute being.

28. Yo mama jokes got replaced by Sallie Mae jokes.

30. This chick Sallie Mae been stalking me

31. I am really considering going to shoot Sallie Mae in her left titty...

32. Y'all so mad, u woulda thought Sallie Mae was on trial and got acquitted. THEN I'd be rioting! Lol

33. Holy shit sallie mae. NO I DID NOT GET SOME LAVISH FUCKING JOB AFTER COLLEGE!!! uuuuuggghhhh fail fail fail all the time fail.

35. sallie mae is a muhfuckr!!! Them the most crookedst bitchez on earth I swear

36. Well at least Sallie Mae was kind enough to tell me that they won't tell me shit.

38. sallie mae is fuckin buggin if they think im paying $700 a month

39. fuck you sallie mae u can suck my dick .....sorry for the harsh language but im livid

40. alright im back to a happy place sallie mae tryna make me lose my christianity lol

41. You got a good degree, but what that cost you? You make a good salary... just to pay Sallie Mae

42. I've already maxed out my federal loans, I got a loan for $16,000 from sallie mae. Now tuition went up again! Scholarship.

43. If we all pull our money together, we can hire Casey Anthony to kill Sallie Mae!! Who's with me?

45. Damn. Imma have to walk around wit my teets out to pay Sallie Mae.

47. If I ran into$ Id pay but if I got filthy w/wealth beyond credit man FUCK Her. Sallie Mae can eat a dick like a College jump in a snow storm

RESPONSE To 51: mJustSaying...that bitch must of resurrected b/c she still sends me emails

52. #youknowtheycheating #undergraduate when Sallie Mae starts billing you on the same day of graduation

55. My headhunter is trying to get me a job with Sallie Mae. When they see my account status, that's over! Rotfl!

56. UUUGH Sallie Mae makes me sick taking out the wrong amt from the wrong account #idiots WHat is wrong with Yall!!

57. I might just take out some loans and sell my soul to Sallie Mae.

58. How many people would throw a party if Sallie Mae and all her records disappeared?

60. ...and I'm survivng another year without having to ask Sallie Mae for any money :]

61. They tell me not to use the word HATE because it's such a strong word but I think I HATE sallie mae... Good Day! 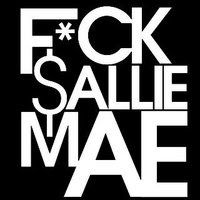 Posted by Cryn Johannsen at 5:14 PM

I have a friend who is being harassed at her own door by men being sent from iowa student loans. Is this legal, and if not, what are good resources I can look into to send her so she at least knows her rights? I'm not sure where to start looking, and I need to, as I have much to look forward to in the next six months.

Sallie Mae is not going to out of business b/c they have a sweetheart deal with the government. They service, originate loans and the method in which it is processed is wrong. The Dept of Education has an "outline" of the protocols but the material issues are omitted. What does this mean? It's license to misrepresent, defraud or mislead. The language and policy that is recited in Dept of Ed is not worded well and tightly- It's license to give leeway for Sallie Mae. Write to your congress. Also, check out POPVOX...and there is a bill before Congress on student loans. your opinion goes directly to Congress and the Senate.

Do you need a Loan?
Are you looking for Finance?
Are you looking for a Loan to enlarge your business?
I think you have come to the right place.
We offer Loans at low interest rate.
Interested people should please contact us on
For immediate response to your application, Kindly
reply to this emails below only:
mohamendloanservice@gmail.com