I am collecting 1000 tweets about Sallie Mae. Hell, I might make it 2000 tweets. I haven't decided yet. But here are the first ten in a new series (mind you, many of them are dirty, sexist, and rude. I am merely the messenger. Sallie Mae, as you'll see, isn't popular in Twitterland):


1. if i was gon knock a bitch out sallie mae would b the first one #onehitterquitter

2. sallie mae on everybody hitlist but know we on hers too

3. thanks to Sallie Mae, I can't even afford insurance.

5. Maybe Tupac had some outstanding Sallie-Mae loans he didn't want to pay for.......

7. When tuition becomes so low I dont need loans from Sallie Mae I will celebrate my independence

8. Just paid Sallie Mae. Where's the FREE in freedom to be educated?

10. Its nice to know that the psychos at Sallie Mae work on Independence day. 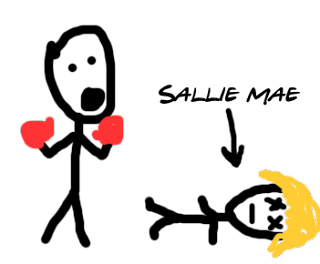 Posted by Cryn Johannsen at 6:56 PM

I love the image! Next time, stick man needs a baseball bat because Sallie Mae is a rabid, 900 pound ape.

Draw that for me, and it will go up with the next set of tweets!

What the average Sallie Mae customer/victim does not understand is that SM probably has a small cramped office where techies hunt new phone numbers all the time using phone comnpany databases and guesstimation....there's none of that cheap-jack wardialing* you see at NCO Financial or any of the other zombie-debt collection "firms", though the little assholes will call you the minute the call window opens in your state.

* Actually, they do "retard wardialing"; they call up every person with your name hunting for you, or they call every possible address they can find, even if you moved away a decade ago...time does not count to NCO; they buy up debts that were already paid off, or are past expiration date, or where both the debtor and the original company are dead!

Real wardialing is where you have a modem dial up numbers randomly to gain access to a computer network, used to be known as "demon dialing" but that chaged after the computer hacker movie "WarGames."