Fitch downgraded Sub and Jr. sub notes for PARTS Student Loan Trust 2007-CTI. The outlook for Class A, B, and C is negative. The downgrades are a result of an increase in defaults to 12.8%. The private loans originated from either TERI or LEARN. PHEAA services the loan portfolio. In addition, PHEAA operates its student loan services commercially as AES (American Education Services). When servicing federally-owned loans, it operates as FedLoan Servicing.

In other news, PHEAA recently announced that it would be contributing $50 million to help the Pennsylvania State Grant Program. The 'financial assistance' is described as 'public outreach.' State Senator Tommy Tomlinson made the announcement. Tomlinson is a board member of PHEAA.

PHEAA has been blasted in the past for gross mismanagement and usage of funds. Several news outlets in Pennsylvania fought for 19 months to have documents on their expenditures released. It turns out, a number of board members and their wives enjoyed culinary classes, luxury vacations, pedicures, and more. The expenditures cost upwards of $682,000. The public funds were used for nearly five years (2000-2005). But it was really just an honest mistake, and PHEAA promised to sort things out. Move along folks, nothing to worry about here. They can regulate themselves, and don't need anyone or any agency meddling with such things. It's heartening to know that some Stepford wives were able to get pedis from funds related to the student loan shark business.

But when Tomlinson says, "PHEAA works hard to make college affordable for students and families," I take his word for it. I am sure Tomlinson cares deeply about education and students. I also trust that they have managed to figure out how to best spend their money. It's all in the interest of students.

I hope the downgrades won't put a damper in the pedicures for their wives. I am also a fan of cocktail parties, so I hope they can continue drinking the finest whiskey and wine.

Even more importantly, PHEAA is embroiled in another lawsuit. It makes the expenditures listed above look like a bunch of crushed, discarded peanut shells . . . more on that later. 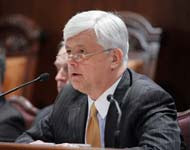 Posted by Cryn Johannsen at 2:08 PM

We're going to need a lot more of this if there is ever going to be real accountability. And, even then, there is not likely to be much benefit to students.