That's the news, folks. A government official told ABC that we're losing our triple-A status. There are only 19 countries with triple-A. Guess it will now be 18 . . .

Again, let's clap for Congress! I want to thank all the economic terrorists for wrecking things. Great JOB! Great WORK!

So, you know what? Time for a major reset. Brace yourself. We're officially f&$%-ed! Before this we were just unofficially f&#@-ed!

There are now reports from Lisa Desjardins, a CNN radio reporter, stating via twitter, "S+P DOWNGRADE more: Admin. official tells CNN that S+P acknowledged 'errors' in its analysis, BUT is still considering a downgrade."

She added: "S+P DOWNGRADE FREEZE: Source in Obama admin. says S+P's analysis was off by 'trillions.' Talks ongoing b/t WH and S+P now."

If you want to follow her, her handle is @LisaDCNN.


Well, a lot of shit happens when you're at the gym! While I was jogging and texting and sweating, the news broke. We've been downgraded. The United States of America has lost its triple-A rating. I'll be digging into how this will impact student borrowers (current and prospective). There is a likelihood that folks with what I call "private-private" loans, i.e., ones that include language like "BORROWER BEWARE," will see an increase in their interest rates. Luckily, there is no other currency, no "safe haven," for investors to flee to . . . that's thanks to quantitative easing, something the Chinese resent.

On a final note, do you think this is how the S & P decided to say "f%&$ you, U.S. Government!" for considering an investigation into their role in the housing crisis? You gotta love the tyranny of the markets - isn't it beautiful? To make matters worse, we have a bunch of economic  terrorists in D.C. who worship Wall St. Lucky for them, they ain't gonna be sufferin' like the rest of us po' folk out here.

Like I said, brace yourself. We're on a new roller coaster from hell. 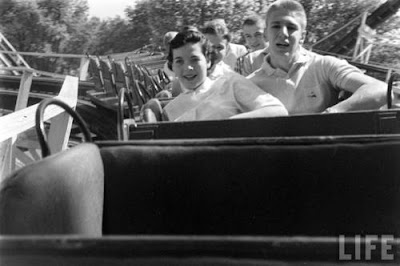 
From the MacroScope, an awesome blog by Reuters, "Historic downgrade: US losses AAA," August 5 2011

"Standard & Poor's warned last month that the United States was at risk of a downgrade if it did not raise the debt ceiling and cut the country's debt by $4 trillion over a decade."

How did they come up with the $4 trillion figure? Oh wait, I forgot, it's a ratings agency. Too bad the market is practically offering the U.S. free money.

You think Obama cares? He is too busy celebrating his birthday at the White House with Jay-Z.

The lack of leadership in the White House is stunning. Maybe if we had leadership instead of a partisan campaign we might get something done.