President Obama Talks About His Own Student Loan Debt

President Obama has tried to woo younger voters about sharing stories about having his own student loan debt, and paying it off.

Recently, he opened up about his student loan debt. He and his wife had $125,000 in student loan debt after they both graduated from Harvard. He said, "it took us 10 years to pay it off," and added, "we were lucky, because we had gone to good law schools, and we knew that we could earn it. It was still a good investment."

Hmmm . . . really? Because I have heard that people who graduate from Harvard Law now aren't doing so well, and probably would beg to differ with you, Mr. President. I also understand that you have admitted that if you hadn't written two successful books - not one - that you and your wife would still be paying back your student loans.

Sadly, you have done relatively little for the indentured educated class. That needs to change, and we'll ensure that it does. We're fired up, and ready to go!

And I'll never forget what you said in your first State of the Union Address: "In the United States of America, no one should go broke because they chose to go to college."

On behalf of the indentured educated class, HAPPY BIRTHDAY, Mr. President. We look forward to working with you on solving the student lending crisis now. Not tomorrow. Not in the future. Now.

AEM will be sending you an official letter shortly! 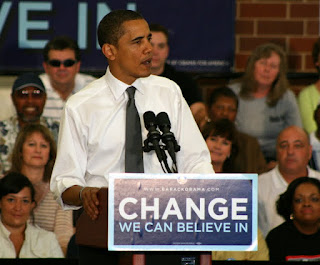 Are you serious, Cryn? That was campaign rhetoric.

Knut - what do you think? Have you seen my posts about President Obama lately? What about my tweets that include the hashtag #neoliberal? :)

Please make note of the tone of the first few sentences, too!

It's also easier to pay off your debt when everyone pays you millions to read your autobiographies. Not every American's life is so interesting, especially if you didn't go to a "good school" like Merkin Muffley, Jr. did.

2012,travel around the country. 2013 on the lecture circuit.
2014 house on Michigan Ave.
2015 Presidential library at Chicago School of economics with Milton Friedman wing and Thimmey Geithner toilets.

1. A Presidential candidate with dark skin has magical powers;

2. Ritually chanting the name of a Head of State (either current or aspirational) accords with the nature of a "democratic republic" as long as he is non-White and reasonably handsome (the latter criterion necessary to omit the likes of Idi Amin and Kim Jong Il);

3. Nodding heads are persuasive, especially when set to music and chanting;

5. "African-Americans" are not to be represented by Somalian taxi drivers.

6. "Asian"-Americans such as the ethnically Japanese-American 1992 Olympic Gold Medalist Kristi Yamaguchi - a fifth-generation American - do not represent "diversity", because they're virtually "White" after all, "White" meaning perceived generally to be hightly educated speakers of perfect unaccented English, or else parents of such persons. Furthermore, in America there is no "Japanese-American" gangsta rap (although there ARE brilliant rappers in China and Japan, but who cares about those NON-AMERICAN non-Whites?)

7. Singing with gratuitous, excessive grace notes means "diversity", even though it's a vulgar corruption of the sophisticated and divinely beautiful traditions of Black American spirituals.

8. Bobbing your head from side to side as if you had a loose egg yolk in your cranium, is multicultural and spiritual, as long as you're pretty and upper-middle class.

9. Aggressively pointing your finger in my face is NOT a provocation for me to bite it.

Seriously, I MIGHT take such a propaganda video a BIT more seriously if it had included some TRULY marginalised minorities, like a Somali taxi driver, or a female immigrant from Malaysia with her hair covered per Muslim custom, or a Hasidic Jewish Rabbi, or for that matter some represenatives of one or more Native American nations. Or a "White Trash" young mother from Eastern Kentucky with a pockmarked face and teeth ravaged from meth.