If you want to get a grasp of the political and economic structures behind neoliberalism, I recommend the following book:

David Harvey's A Brief History of Neoliberalism (Oxford University Press, 2007) - Harvey does an excellent job of demonstrating how capitalism informs everyday life, both at the micro- and macro-levels. Michael J. Thompson wrote a good review of Harvey's work when it first came out in 2005. Thomspson also contextualizes Harvey's intellectual development by referring to earlier publications. Moreover, Thomspon is correct in asserting that Harvey wishes to drive home an important Marxian point, i.e., capitalism is not merely about money and economic markets. Instead, capitalism is a driving force in modernity. Neoliberalism, in my view, is the terrifying end of modernity. In its reckless drive to commodify all things in a market system, postmodernity is bereft of the core values once shared in a modern context. Within a neoliberal system all things are measured by their role in a "market system," and that is precisely why higher education has been wrecked in this country. Furthermore, the state is perceived to be the enemy, and the Tea Party - and their backers - exemplify this attitude. At the same time, the state does not disappear as an acting agent. Instead, it turns against its citizens and becomes a police and war state. Hence, our never-ending wars across the country, and our obsessive need to create enemies and occupy - we also justify these actions by insisting that these efforts are "humantarian" in nature, even when we murder innocent children, women, and men. That is really code for partial colonization. Iraq is a great example of that (if we have built the largest fortified embassy in Baghdad, that suggests we have no intention of leaving). We are a flailing empire. While social programs for the poor and the needy are eviscerated at home, the state offers welfare to businesses who privatize things once run and regulated by the government. That is how criminals, for example, become commodities. As the welfare state hemorrhages, the poor find themselves fighting for scraps. At the same time the middle class shrinks, because it is no longer needed to help propel economic growth (that was the old model), and that leads to more and more people joining the ranks of the poor and forgotten. The spiral of poverty widens, like a mega-tornado, and millions more are sucked into economic misery. Privatization is tied "harmoniously" to efficiency, both of which lead to significant job cuts, homelessness, and societal decay. Desperate, fighting for few resources, many succumb to violence. They either become victims of brutal crime (both at home and in their communities), or they become criminals. Since the prison system has been privatized, that specific industry relies upon these "commodities" to commit crimes. Even when crimes are committed out of hunger, the poor are punished severely. Here is one atrocious example.

An increase in crime is easily justified by the wealthy few at the top. Just as many of the wealthy in the nineteenth century blamed the poor for their "deviant" and "criminal" behavior, rather than honestly assessing the brutality and inequity of the economic structure in place, the wealthy today have returned to these same despicable and wantonly cruel old tales.


While I am no suggesting that we are repeating history - that's an egregious idea - we certainly see parallels to what occurs when capitalism is allowed to dominate all forms of discourse and, even more importantly, social reality. There is hope, however. It will most likely be painful, but neoliberalism will implode. It appears to be happening at this very moment. I was foolish in thinking it would be slower. That means that the possibility for something different, something better is within reach.

In addition, I also recommend reading the work of Henry A. Giroux. His work is enormously insightful  in diagnosing the symptoms of neoliberalism. 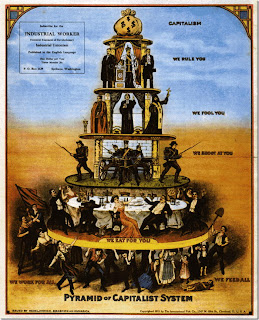 Posted by Cryn Johannsen at 6:58 PM

I have to get Harvey's book now.

I will just buy it, but I do know that if my local library doesn't have the book, they order it from another library and I have it soon.

Thanks, JDpainterguy. If you can't find it at your local library, you can buy it used on Amazon for next to nothing.

Thanks for the recommendation, Cryn! I just downloaded an e-book version, and will dig in this week.

I second the recommendation. It's a good read.

I'd like to have a giant mural of that "Pyramid of Capitalism" image painted on both sides of my work van.

Cryn, see my email outlining my partial disagreements. Meanwhile, in memory of what was best in Karl Marx - some of whose YOUTHFUL qualities (before he became a boring and arrogant pedant) were in fact romantic in an admirable way - please enjoy the "Communist Manifestoon", which remains considerably informative even about current developments in 2011: http://www.youtube.com/watch?v=NbTIJ9_bLP4

...But nonetheless, the historical fact remains that all utopian states putatively based upon Marxism, have failed, and they failed (including "Communist" China which has become ANT-Marxist) because of the Nature of Man.

Exhibit number One: What I am presently using for an ashtray, is a dish I purchased in China for 60 RMB, around ten US Dollars. On its bottom is a picture of Mao and Lin Biao who was Mao's designated successor until he was killed in 1971 after an attempted coup. On the BOTTOM of this dish is the date of its production, May 1 1968, the height of the Cultural Revolution. But then around the edges are some words added later, after Lin Biao's was purged in 1971, these words being added to keep the dish "politically correct":

Just one example of the inevitable consequences of regarding Marxism as religious doctrine. As Marxism is in fact a half-truth, it will always be bent toward the personally convenient lies and crimes of those in power, and as it is an atheistic set of doctrines it is essentially devoid of compassion and of any fear of the ultimate consequences of lies or cruelty. AND SO IS MARXISM'S HALF-SIBLING, NEOLIBERALISM!

And re, "we also justify these actions by insisting that these efforts are "humantarian" in nature, even when we murder innocent children, women, and men. That is really code for partial colonization."

...True, and just to keep 'colonisation' and empire in perspective, the "Marxist" Soviet Union did exactly the same thing as per its available opportunities.

I've not been in Russia since the 1990s, but even back then in "post-Communist" Russia, there were still lots of advertisements for "Chunga Chonga" candies. (Very good candy, I must admit.)

Who was Chunga Chonga? He was a cartoon character created in Soviet times, in the 1970s, and even in Communist times he was a mascot for advertisements. Yes, the "Communist" Russians had commercial advertisments too!

Chunga Chonga was a dark-skinned "indigenous" boy from a generic "third world" country of unspecified location, but it was implied to be in the tropical region of "Africa". And the story of Chunga Chonga, is that some Soviet Red Army soldiers LIBERATED HIM from evil (American, and maybe British) "capitalists" who had not learned the Marxist tradition of RESPECTING "third world" cultures!...

...(even though Marx had nothing but contempt for Russians and Chinese, whom he regarded as too primitive for Communism, and Marx didn't give a flying f--- about Africans at all)...

At any rate, YES in the "Marxist" SOVIET UNION in the 1970s, "multiculturalism" and "respect" for "third world" (meaning non-White) people was all the rage! At least in official propaganda, but meanwhile the Russians remained - as they still remain - one of the most racist nations in the world. Like the elites of America, actually, including the ones who put America's Chunga Chonga (Obama) in the White House.