Are you aware that the Pell Program, which helps low-income Americans go to school, is on the chopping block because of this debt ceiling fiasco? That's right. It is. I also wrote a piece recently in defense of Pell, and called for bold increases to the program.


If you tweet, I encourage you to send the President (@BarackObama) and the Whitehouse (@whitehouse), as well as House and Senate leaders tweets that let them know you're worried about Pell. You could send the following, and also call the White House. Here are some suggestions:


A number of organizations have sent the President a letter, urging him to protect Pell. All Education Matters signed that letter too.
Here it is:
July 15, 2011
The Honorable Barack Obama
President of the United States
1600 Pennsylvania Avenue
Washington, DC 20500
Dear Mr. President:
Throughout your presidency you have shown a strong commitment to increasing our nation’s college completion rates and have made great strides toward advancing this goal. As you negotiate with Congress on a debt ceiling package, we urge you to honor this commitment by protecting the maximum Pell Grant and avoiding any eligibility cuts that would be harmful to students. Cutting Pell Grant awards or eligibility will reduce access to college, undermine the economy, and lower college completion rates when we need to be raising them.
As you know, Pell Grants make college possible for over nine million Americans. They enable the neediest among us to get the postsecondary education required to increase their earning potential and keep America competitive in the global economy. Even after the significant increases in the maximum grant that your Administration secured, the maximum Pell Grant will cover less than a third of the cost of attending a four-year public college next year—the smallest share in the history of the program. Furthermore, Pell Grant recipients are already more than twice as likely as other students to have student loans. Make no mistake: cutting Pell Grants at this time—either through a reduction in the maximum award or through harmful eligibility changes—will reduce the number of people who can attend college and earn a degree.
The recent increase in the cost of the Pell Grant program is no reason to make damaging permanent changes to this successful and vital program. Fully 40% of the recent rise in Pell costs is because of the economic downturn, not policy changes. When millions of Americans lost their jobs and saw their incomes decline during the recession, the Pell Grant program responded as it was designed to—ensuring access to education and training when jobs were scarce. Another 22% of the increase was due to the year round Pell Grant program, which was ended under the FY2011 budget agreement, reducing program costs by $40 billion over 10 years. Because of this change and with the economy continuing to recover, program costs have stabilized. In fact, the Congressional Budget Office projects that Pell Grant costs will grow less than 1% a year in the next two years and only 2% a year over the next ten years. After adjusting for inflation, spending on Pell Grants is projected to decline in each of the next two years. 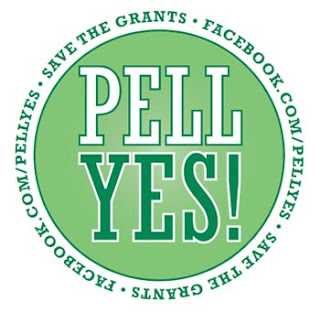 Will Obama's corporate handlers allow him to do anything that would benefit working class people?!