Citigroup's big tax break, Wall St. continues to hum along like it always has, and we're all drowning in more debt. Oh, and guess what? Defaults are up!

Matt Taibbi, who himself was in exile over in Russia during the 1990s, wrote a damning article in Rolling Stone. It's a nasty analysis of the fact that Obama is a big sell out (that's the title of the article) and details the economic policies and individuals Obama appointed to his economic advisory team - these people have little if any concern for the rest of us (Larry Summers is just one of many, and I am not a fan of his). As Taibbi sees it, this economic team is "made up exclusively of callous millionaire-assholes [who have] absolutely zero interest in reforming the gamed system [i.e., Wall Street] that made them rich in the first place."

Today I read that Citigroup (mentioned left and right in the above article) has received a generous tax break from IRS. Hooray! Hooray. My enthusiasm is waning, but perhaps that's because I'm ill. Instead of being employed as an analyst or working for the people as a bureaucrat in perhaps the Department of Education, I'm being forced to move, move, move for the holiday season. The past few days I've worked at least 8-10 hours and have been so busy I've been out of breath. But ain't that great? That's why I went to school to become a thinker and analyze documents - indeed, I'm so glad I went to U. of Chicago, Brown, and Harvard. It's really paying off. Now I'm sick as a dog and really don't have the energy to bark about these folks on the Hill and in the White House, because I'm too exhausted to do so. Luckily, I have options and am leaving this country to teach. That's after all what part of my training was to do - to teach, to educate. That's called community service if you ask me. Too bad I can't do such things in my own damned country. Even though I'm workin' like a dog, I ain't makin' a dime. Why? Because consumers have steel clamps on their wallets. Trust me, things are bad. I know that because I'm on a sales floor, and so an article like this one further proves my fears and analysis about this floundering economy.

And we're all too tired to be doing anything, especially those of us who are unemployed or underemployed (as Barbara Ehrenreich recently discussed here). Indeed, we're too busy working on re-branding (white collar folks) or re-training (stuffing those community colleges to the gills - that's only good news for the student loan sharks).

Meanwhile, defaults on student loans have gone up a startling rates. All these things just aren't adding up. I thought this Administration was into populist politics and looking out for those of us drowning in debt. But I guess all these things are our own fault, because we failed to consider the degrees were seeking. (That's what all the critics are saying about us, and I'm sure glad the Administration is there to stand up for our rights and set the record straight about the student loan debt trap). Hmph. 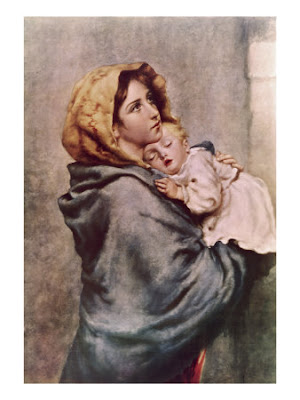 Madonna of the Poor sure ain't watching over Citigroup

You're definitely not annoying. My head was in a cloud when I wrote this piece, so it's nice to hear that you thought it was good - imagine that, I can manage to articulate things when I'm sicker than a dog. I'm always appreciative of your comments, even if they are about my typos. ;)