Rolling Jubilee: You Are Not A Loan

Occupy Wall Street has launched an ingenious campaign, something that is truly beyond capitalism. Just as they have stepped in to help victims of Sandy (OPERATION Occupy Sandy), the collective group of dreamers, activists, and community lovers have decided a new angle to the solving the debt crisis - a bailout for the people and by the people. The People's Bailout, cleverly called a Rolling Jubilee, begins on November 15th! 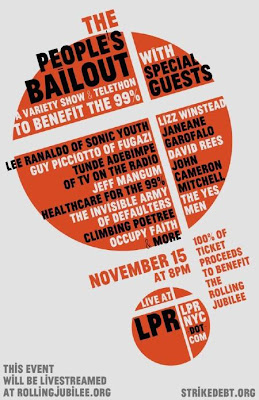 Posted by Cryn Johannsen at 4:16 PM

If the penalties were not so severe, I would gladly walk away from my debt.

However, I have learned that default would destroy my life in many ways so my husband and I are homeless, in order to service our student debt. Soon, it will be too late for us to have children. We need help!

I am the person who just wrote the above comment. After submitting, I broke into tears. I am trying to be strong and I don't want to be just another student loan sob story, but sometimes I just can't take it anymore. I am not sleeping sleeping at night. Once I do fall asleep, it's early in the morning the next day and my face is stained with tears. I never want to wake up because when I remember what I'm going through, I feel like I'm getting kicked in the stomach over and over. I try, every moment of every day to pretend like things are going to get better. "This is just a transition," I tell myself, but it isn't. I see no means by which we can pull ourselves out of this. We are staying in a hotel with a family member who just happens to be in town but once he leaves in a week, I don't know where we'll go. We're nearing a half million in combined student debt. I am also the person who was on psychiatric medication when taking out my loans and don't recall signing for anything. Lawyers have told me that since I finished my degree (after getting off of the meds) the banks will argue that I wasn't too incompetent to sign since I was able to graduate. My husband and I are middle-aged. We'll never have kids. We'll never go on vacations. Hell, we'll probably never even have our own apartment again, let alone a house. Cryn, like many, I worked very hard to make sure this would never happen, yet it is my hard work that put me here. If this constant stress and anxiety are all I have to look forward to, I don't want my remaining years. This is not a life. I can't take it anymore. Please, someone, make this debt repayable! We owe near $4,000 every month. THIS IS IMPOSSIBLE!! It is more than we make! HELP! Please, someone, HELP! What is it going to take for us to get relief?