Oh! Isn't this generous of them?!? Sallie Mae and Congresswoman Virginia Foxx (R-NC) are hosting a workshop on how to pay for college! (Also, don't get the wrong idea about her - she's no shill for the lenders or the banks!) I bet that's going to be a stellar event, and the (mis)information will be grand.

On top of all the (mis)information the duo will be offering, they'll be handing out a whopping $500 "scholarship" for soon-to-be indentured students! Ain't that cute? What will that pay for? Let's see . . . I bet it will cover the cost of a textbook for their Chem class! Wow. Impressive.

They are soooooo generous, the event is also free?!? Wowser. I am so blown away. I wish I could attend!!! 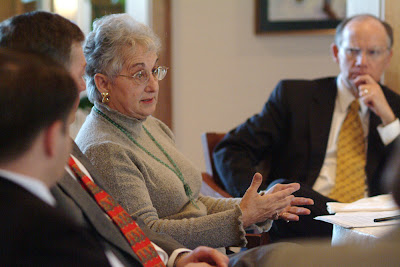 This illustrates the main reason why I went from hardcore Dem to Rep. I agree with lots of ideas/issues with Dems, but these ideas/issues require a competent, honest Gov. Instead, the Gov has repeatedly shown to be incapable of administering resources justly and with accountability.

Next election, I am going to vote for whoever proposes to curtail student loans; and something tells me that is not going to be a Dem.

Thanks for sharing. I don't think it's so clear cut when it comes to Dems vs. Repubs. I don't think it's cynical to think that both parties are bought and sold. But that doesn't mean government is broken. What is the problem? What do I see as the primary reason for corruption? The private sector - i.e., multi-billion $ corporations and people - have inserted themselves into the democratic process. THEY are calling the shots, so that makes it hard, even for the most honest, public servant to represent the interests of the American people.

I encourage you to watch this short film. The majority of Americans (85% of us) do not want corporations involved in politics.

Anon, Cryn knows me to be a self-described conservative, albeit of the Burkean tradition instead of the neocon cult, neoconservatism literally having been invented by former Marxists, including a considerable number of Jewish-American admirers of the Soviet Union who took half a century to figure out that the Russians were still antisemitic.

And being a traditional conservative is exactly why I loathe what the Republican Party has become. There's less than a dime's worth of difference between the dishonesties of the likes of Obama and Hillary "Nurse Ratched" Clinton, and the bloody Bush administration who criminally launched several wars of choice.

what bothers me about this: during Virginia Foxx's youth, many, including GI's were denied benefits including under GI bill but $$ was graciously and generously to certain select people. she herself probably benefited from some form of funding.

luckily there are scholarship options out there but "criteria" is changing for them as the tone of our country changes to "ours" not "yours" - yup, back to Jim Crow days. I can just hear the American flags being snatched again from the "not yours" hands. I'll have to find that pic of Mississippians snatching flags from blacks w/ signs that stated go home as they were trying to attend public schools and colleges that all tax dollars paid for 8-/

Everything about her is horrible. Everything.

About that 500 dollar "scholarship":

Around 30 years ago - when the purchasing power of a dollar was around four times what it is today (conventional statistics of inflation are lies) - I won a National Merit Scholarship AND an unrelated full tuition academic scholarship, the latter being funded by my universities' donors.

Back then, 250 dollars per year was almost negligible. It approximately paid for my textbooks. Yet in purchasing power it would be like 1,000 dollars today. Mutatis mutandis, a "scholarship" of 500 dollars today would be like 125 dollars back then, barely enough to pay for one semester's worth of textbooks. And that was in the era of Reagan when the screws were already tightening on the middle class.

I can keenly remember my cost of living from my college years, because I had to pinch every penny. Let's see how far 4.65 would go back then, when I lived in a rented cockroach-infested house (300 per month, shared with two roommates) in the ghetto to save money instead of living in the dormitories, so I cooked my own food:

1. Pasta, around one dollar per pound, I ate at least one pound per week, that's one dollar;

2. Pasta sauce, at least one dollar per week, albeit sometimes supplemented by gifts of homemade sauce from my first-generation Italian roommate's mother;

3. Milk, around two dollars per gallon back then, one gallon per week kept my protein level healthy;

4. Renting a locker at the gym 7 days a week, 25 cents per day, 1.75 per week. This "luxury" would exhaust the "scholarship", and I haven't even bought any veggies or chicken wings yet! NOR ANY BOOKS!

I'm using the prices of the 1980s because I've not been in America for many years. But my above hypothetical is comparable to the plights of many MIDDLE CLASS American students of today! Offering them a "scholarship" of 500 dollars, would be as negligible as in the above hypothetical.

Meanwhile, and in contrast, guess a country that has one of the highest standards of living in the world? One of them is FINLAND! And in FINLAND, students pay NO tuition, AND they receive a stipend for reasonable costs of living! And what have these "socialist" conditions of Finland produced today? Inter alia, an infant mortality rate less than HALF that of the USA!