The Author's Hour: Morley Winograd and Mike D. Hais and their Search to Understand Millennials

If you are an author and interested in being featured on AEM in this new series called, "The Author's Hour," please send me an email (ccrynjohannsen@gmail.com).
Mike D. Hais and Morley Winograd are political scientists who found themselves interested in Millennials. This interest turned into two books, one of which is being published this coming September. Millennial Momentum: How a New Generation is Remaking America is their latest work. Mike and Morley sent me an advance copy last week, and I've already devoured most of it. Their statistics about higher education, as well as the conclusions they draw, are golden. In addition, their take on the Millennial generation has given me a great deal of hope, something that is hard to come by at this juncture in U.S. history. 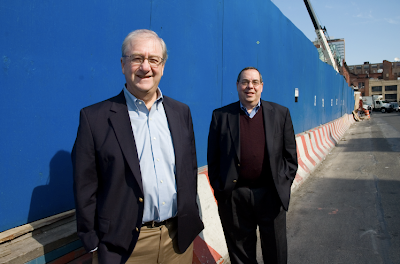 Mike and Morley in NYC
Posted by Cryn Johannsen at 3:38 PM

1. First an Aussie "good on ya" to Mike and Morley for your good work on an important development in recent and current history.

2. Re: "Demographically, Millennials are the largest and most diverse generation in American history."

"Largest" is numerically incontestable, but "most diverse" is essentially contestable, because it depends on what "demographic" qualities you choose to acknowledge as significant. You have assumed a priori that putative qualities such as "race" - another essentially contestable concept, subject to myriad arbitrary redefinitions (eg "one drop of Negro blood makes you a negro!") - are more significant indices of demographic "diversity" than less easily "measurable" ones.

Personally I wonder how much real "diversity" there is among the MINDS of the Millenials, in particular vis a vis their historical consciousness. If so-called "Whites" and "Blacks" and (don't even get me started on this VERY arbitrary term) "Hispanics" (as if Puerto Rico were the same culture as Mexico!)...

...sorry for the digressions, as I was saying, if the majority of Millenials of so-called different "races" generallY SHARE the same omnibus ignorance of ALL civilisations prior to their own generation - all of them equally ignorant of Ancient Rome as well as of the Moorish scholars who collaborated with Europeans in Spain's golden age - then how do their putative "races" make them truly diverse?

How many Millenials of ANY "race" really know, or give a damn, about belonging to a seamless web of the ancient (and hopefully continuing) civilisations of their ancestors? Or regard themselves as the present link between ancestry and posterity, bearing obligations to the dead AND the yet unborn, to preserve the best legacies of the former for the sake of the latter?

THIS kind of thinking transcends the capacities of "social media"; social media might be useful for such ways of thinking (generationally), but it's not enough per se. And personally I regard this as the Achilles Hell of the Millenial Generation (as well as of the prior two generations!), their common denominator of ignorance of, and indifference toward, other generations, especially those perceived to be "remote" in time.

How can any generation positively "influence" future ones, if they have little or no interest in (or at worst, contempt for) prior generations? Owen Barfield called that way of thinking, "Chronological Snobbery", the superstitious belief that the present generation is categorically "more intelligent", "better educated", "more informed", "more enlightened" than any prior ones. But Hitler's generation disproved that when 20th century Germany, the most philosophically sophisticated, most technologically advanced, and otherwise most "progressive" country in the world, acutely reverted to barbarism. As America is on the edge of doing as well, today, with even higher technological means of barbarism than the Nazis ever dreamed of.

Here's a blistering anti-establishment essay on what is conventionally called "Diversity", in the Chronicle of Higher Education (Good on 'em for publishing it!), titled, "Love Me, I Celebrate Diversity":

Best paragraph, one that my semi-hero Karl Marx would enjoy:

"I get the message that driver is trying to convey: "You in that old car behind me. I am morally superior to you because I celebrate diversity, and, therefore, my wealth is deserved, as is your poverty." Somehow I doubt there is much diversity in her gated community, or her kids' school. I wonder if she thinks good neighbors come in all classes, too?"

..."Diversity" is NOTHING NEW! It's as old a Civilisation, and it's inseparable from Civilisation!

Among my several vocations, I'm a numismatist, a scholar of coins and their histories. One of my recent acquisitions is a coin minted by, and portraying the diademed bust of, "Soter Megas" - whose personal name was Vima Taktu - the Emperor of the Kushan Empire in c. 80-90 AD.
The coins of his reign are inscribed in Greek, "Soter Megas", meaning, "Great Saviour", very similar to how North Korea's first leader Kim Il Song is regarded as a god, and his son Kim Il Song is the son of a god.

I would bet a thousand Aussie Dollars (but not my entire fortune) that none of Cryn's readers, including Morley and Mike, have ever heard of the Kushan Empire. (But I acknowledge a SMALL chance that Morley and Mike know about it, that's why I bet 1,000 dollars but no more! ;-)

Here's a map of the Kushan Empire: http://en.wikipedia.org/wiki/File:Kushanmap.jpg ...

...and I WOULD bet ANOTHER thousand dollars, that neither Emperor Obama nor Secretary of State Clinton - who are currently waging illegal wars upon those lands - have ever heard about the Kushan Empire!

Anyway, what does the Kushan Empire have to do with "Diversity"?

Simple answer: The Emperors of the Kushan Empire WERE MULTICULTURAL AND RELIGIOUSLY HETERODOX! They were fluent in (the ancient forms of) Farsi (Persian) AND Greek, AND their local dialect of Hindi! As for religion, they acknowledged ALL gods (including the God of the Jews and/or of the new sect of Nazarene Jews, followers of Jesus) as worthy of respect. They, and the denizens of their empire, were a mix of cultural Persians/Zoroastrians, AND Greeks (the First Kushan Emperor's Greek title "Soter Megas" was inspired by a mixture of Alexander the Great and the last Persian "King of Kings"), AND various kinds of Buddhists and Hindus!

All a beautful mess of cultures and religions, in what is now Pakistan and Afghanistan and northern India, around year 80 AD when Jesus' Apostle, Saint Thomas, visited that region as an old man, founding the first Christian church in the East Indies.

Oh, but now suddenly in the early 21st century, a (powerful, yet truly small and ultimately insonsequential) handful of American and European bureaucratic-"academics" arrogantly and hubristically believe that THEY are the PIONEERS of "MULICULTURALISM"? As if it's something NEW?

HA! No. The "cutting edge" of "diversity" is Civilisation itself, and it's thousands of years old.