I am pleased to announce a new series on AEM called "The Author's Hour." This series will entail interviews with  authors who are already published or on their way to being published. The subjects will be wide ranging. We'll talk to experts from the fields of economics, history, sociology, political science, philosophy, literature, etc. The intent of this new series is to connect with authors whose work intersects with my own. This way, it will allow me to introduce my readers to other authors who are:
These conversations will also provide me with new insights for my ongoing research and projects on the student lending crisis, higher education finance reform, and so forth. Since I have had, and continue to have, such inspiring conversations with candidates, I want to share the discussions I have had with inspiring authors, too.
Both series illustrate the exchange of ideas between people. As we all know, we don't come up with concepts or theories on our own (everything is derivative - it's new analysis that matters). In order to be effective as candidates, political activists, community leaders, intellectuals, parents, teachers, etc., we must be open to sharing with one another. I've been reminded of this a lot lately, as I've had the privilege of working with so many bright people and outstanding orgs. These folks come to the table with different experiences, educational backgrounds, opinions, etc., and deepen my own understanding of the world. It's truly inspiring. Here at AEM, we believe in the power of reciprocity. We do not believe that ideas are confined within bubbles or one person's brain. And the folks with whom I work feel the same way. That's one of the reasons I have changed the series. As you'll see below, under "Related Links," this idea was actually launched about a year ago, but at that point, I called it "Conversations that Matter." The new title invokes a sense of learning from our guests, and truly highlights their own work.

Let's turn to the first interview!
It is with great pleasure to introduce the first two authors in this new series. There names are Morley Winograd and Mike Hais, and they are the authors of a forthcoming book called, Millennial Momentum: How a New Generation is Remaking America (Rutgers University Press, September 2011).
I spoke with Morley and Mike recently about politics and the economy, millennials and the student lending crisis. (We also discussed how the weather is almost always terrible in Dallas. The day I spoke to them, it was 110 degrees outside. Texas has experienced extreme heat this summer. For 8  miserable weeks, we had temperatures above 105 degrees. I appreciated the fact that Morley and Mike were sympathetic!)
In any event, their book has given me a great deal of hope about our country's future.
Let's hear what they have to say about these issues!
Stay tuned for the interview (it's lengthy, so I am breaking it up into several parts). 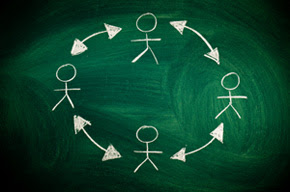 "Conversations That Matter: Claudia Dreifus Talks About Why Colleges Are Failing U.S. Students," AEM (September 12, 2011) - PSSST! The paperback version is now available, and they reference my work as a political activist and give me credit for the term, "indentured educated class."
Posted by Cryn Johannsen at 12:37 PM

Can we start yet another series? We can entitle it, "Discussions With Nando and Lauren Graham." Just a thought.

For the many pagans/atheists/agnostics in our movement (and for the honest students of Machiavelli among the Christians (including me and Cryn) in our movement)...

(and I regard Arnold Schwarzenneger as someone who became a creep in his old age, BUT HE DID MAKE SOME GOOD MOVIES when he was a young man!)

...I recommend this as a metaphor for how and why we can and should fight back against our oppressors:

It's time for the Indentured Educated Class to learn how to be as ruthless as the Ruling Class who have been enslaving them. THEY HAVE NO MERCY FOR YOU, SO NEITHER SHOULD YOU HAVE ANY MERCY UPON THEM!

It's time to fight back against them, by any means necessary.