Is the war against Sallie Mae getting uglier?

Wow. Now Sec. Arne Duncan is coming out against Sallie Mae. They've run a student loan racket for far too long. I fear that Sallie Mae will successfully turn the rhetoric into these hogwash claims that the government is trying to "nationalize" the industry. Let's not forget that Sallie Mae and its ilk are SUBSIDIZED by the U.S. government. That's exactly why they have no interest in working with borrowers. The money that's been loaned out has ALREADY been covered. (It's too bad Sec. Duncan didn't mention that Al Lord, the CEO of Sallie Mae, has made a killing off of being a student lending loan shark. His sprawling estate in Anne Arundel county has a private golf course. In my piece a few months ago bout G-man hero, Jon Oberg, I provide information from an article about Mr. Lord's treasures.). I also love this claim, i.e., that by "cutting-us-out of-the-picture, the Obama Administration will be killing jobs." Ha! Ha!

Also, as so many of us know these lenders provide such invaluable services to students. For starters, they have done an excellent job of creating an indentured educated class. It sure would be a shame to see that go away. So, uh, yeah . . . I hope they stay in the picture because I like how these jobs of which they speak are ruining the lives of millions of Americans (when you think about the co-signers on these suckers, the number of those who are imprisoned by their ruthless debt collecting tactics grows enormously).

We need to continue writing, emailing, AND organizing on behalf of the indentured educated class. I begin my training in Seoul on Tuesday, but I am mad as hell that I can't be advocating and making a living wage in my own country. But if I can't pay the bills in the U.S., what good would I be to others in need?

But I am encouraged that we're being heard on multiple levels in D.C.

I am anxious to touch base with Senator Sherrod Brown's office. So far, I've only had one conversation with the Education staffer there. I know that many of you would like to know what's going on with the private loan debt swap proposal. I am too. 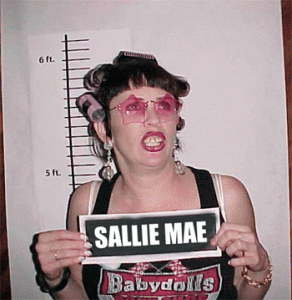 Not only should Sallie Mae be kicked out of the lending industry, they should be thrown in jail!
Posted by Cryn Johannsen at 8:51 PM

Sallie Mae is not merely subsidized - it actually began via Congressional mandate. It was a quasi-governmental agency (heck, look at the name, "Sallie Mae", of a type with Fannie Mae and Freddie Mac) until it was privatized in the 1990s (*after* my loans were consolidated through them, I might add).

Sallie May is a nightmare to work with. I haven't consolidated my loans that I have with them yet, as half are with them and the remainder with Nelnet. My undergraduate loans stayed with Nelnet while my graduate loans have move through five providers thus far, and ending with Sallie May. I had a huge mess to content with Sallie May when I was unemployed a few years back; when yet another company I worked for shut its doors in the states and off shored its jobs to an outsourcer in the Philippines. I filled out all the paper work I was suppose to for deferment due to unemployment. They continued for months to send mails back to me stating I hadn’t submitted the appropriate documents, which they mailed me. Even the people, from India that I spoke to said I sent in the correct documents and they couldn’t figure out what was going on. After six months of this, I was already back at work and resumed my payments. Nelnet was actually pretty helpful in my contacts with them. They took care of it over the phone and actually directed me to their website, made sure I had the form available to me on the phone, and I submitted it electronically. When I do consolidate my loans it won’t be with Sallie May.

Reid - I am glad to hear that your experiences with Nelnet were straightforward. That's good to hear. While I find all of these lenders pretty repugnant, it's good to share positive information as you did above. I think Sallie Mae and Nelnet should be dropped by the U.S. government. I have no hope of SAFRA making it through the Senate. It's already been stalled. Big surprise. It's gonna be like the whole health care disaster. If the dang thing even makes it through, the lenders will have their hands ALL over that sucker. That's why we must remind the President of his promise to get RID of lobbyists and special interest groups. They are destroying the country. I still have hope for Mr. Obama and his plans. But he needs to listen to our voices. If he goes against his word on these things, he and the Democrats will be losing a HUGE part of their base. The president won because of our votes, so he needs to live up to the standards he's set for national elections. I refuse to accept that he's a 1-term president and another Carter. B---s--t. If he's open to our problems and turns his attention to the needs of good, hard-working Americans, the President will win the next election.