Calling All Volunteers: The time has come to organize at the grassroots level - Who wants to be a State Support Leader for the Indentured Educated Class?

In the last 3 days I have been in Houston, TX, the Dallas/Ft. Worth Metroplex, Flagstaff, AZ, Barstow, CA, and now central Cali. I left the center of this decaying empire - D.C. - and drove all the way to California (my final destination before leaving the country).

Houston is where I received my visa to enter Korea and work. It was a whimsical day. For starters, the Korean Consulate is located in a beautiful part of town. For the first time in months, I felt the warmth of the sun. Maybe it felt good because I left knowing I have a job waiting for me . . . and I am ready to work!

After Houston, we had two hard days of driving across Texas, New Mexico, Arizona, and finally California. The level of poverty that we saw in each state, especially the Navajo reservation in northwest Arizona, was . . . sadly, not startling. Beneath those dramatic skies there are so many forgotten Americans (oh, how distant and - dare I say futile - does the world of policy and harried politics of D.C. feel when you are in these isolated parts of the country and witness to the most forgotten and forsaken citizens of the U.S.). After driving from D.C. to central California, I couldn't help but focus on the poor, who are scattered here and there, living in broken-down trailers and dingy boxes we somehow think are "homes." These people are all hanging by threads, and yet living in a country that has astonishing natural beauty and resources. While I appreciated the serene landscapes (ghostly bogs in Arkansas, snow-capped mountains in Arizona, the quiet, endless deserts in eastern California), the poverty was a painful reminder of how much we're failing to live up to our ideals. It shouldn't be this way, and those who have pursued higher education shouldn't be indentured servants to student lenders. I write this post in a beautiful hotel room. The Pacific is just a block away. It's so beautiful here, it's surreal . .  and I don't feel right.

Why does it feel wrong? Because the voices of desperation have now turned to painful shrieks. Many have told me that if their father or mother hadn't co-signed, they would end it all. I understand this pain and the feeling of being trapped all too well, but being an indentured servant does not justify taking one's life. We must turn our anger and feelings of helplessness into something positive. We must organize. I'd say the first writing campaign went quite well. (Incidentally, I mailed my letters off from Houston, just before my interview at the Korean Consulate's). But letter writing campaigns aren't enough. And we all know that.

That's why we need you to volunteer and become a point person for those who are also a part of the indentured educated class.

I have 7 state support leaders at this juncture. Moreover, I am the Korean and International Support Leader. But I need more people to take on leading roles in this country and abroad. I urge you to touch base with me and volunteer your time. I was impressed by Obama's grassroots model (I was a part of this campaign effort, and also a chosen volunteer for P.I.C. on the day of his inauguration). We must get together in our hometowns and discuss the student lending crisis with others. In so doing, groups of people can talk about tactics that will enable them to confront the student lending crisis at a micro level. Point people (and I'd like at least 5-10 in each state) will then share about their progress and how they're raising awareness here (http://www.facebook.com/profile.php?v=feed&story_fbid=296348398617&id=1146475160#!/group.php?gid=278716756621) - that's The Support Group for the Indentured Educated Class on Facebook.

Bear with me, I will be turning my blog into a website soon. But like most of you, I don't have the funds just yet to do that . . .

On a final note, I just got another state leader today, so please think about joining this grassroots effort!


We shouldn't be forgotten! We shouldn't suffer because we pursued higher education! We must stand up and organize for REAL change NOW! 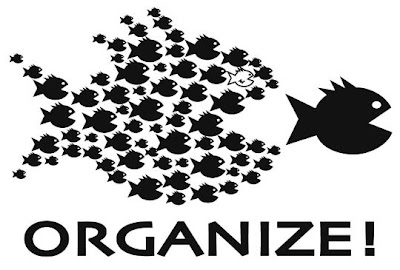 Posted by Cryn Johannsen at 5:44 PM

CC: If you want a good site template, check out ning.com (for an example, http://enuminous.ning.com ) it lets you make a Facebook-style social site, which would be appropriate for this project, and is free!

Matthew - would you be willing to set it up?