The son who wants to help the struggling family (In your own words: Reflections on Student Loan Debt - Part III)

In my first two installments of a series entitled, "Reflections on Student Loan Debt," - (see here and here) - I  encouraged you, indentured educated citizens, to share your own stories about either being or not being in denial about that debt you've amassed as a result of going to school. Many of you have been willing to share your testimonials, and I think it's critical to share those personal tales about what it's like to be in the depths of this type of debt. One reader recently submitted her story, and in it she wrote:


"My husband has owned and operated a small business for nearly 25 years. As he was beginning to come out of debt, the economy crashed. He has been able to survive by clinging to the life of the business by the tips of his nails. I decided to get my master’s degree with the hope of getting a higher paying job that would allow us to make it through the final push of his plan (he is 53, had originally intended on going into semi-retirement at the age of 50, now who knows).
I graduated in December of ’09 with my master’s degree and have yet to find a job in my field. I’ve spent the equivalent of a full-time job searching, sending resumes, and engaging in follow-up[s], only to make it several times to the last round and lose out to someone else. We have been living sparsely, borrowing money from each other when we get it to make ends meet. Our son turned 11 on May 12[th] and asked me what he should do with his birthday money. I told him he should save it but instead, he asked how he could be contribute to the family budget—he feels compelled to 'put it to the best possible use.'
My student loans are out of control. Between undergrad and grad school, the loans have amassed exponentially. I did pay on them regularly in between undergrad and grad, but with the state of the economy (I worked in fine dining for over 20 years in a tourist area, which of course, was one of the first areas to drop off when the economy went bad), I am terrified to assess and evaluate [the] payment[s] of my new loan situation. If I end up getting a job starting at $30,000 a year, that would be the answer to our financial prayers. However, at this point, how much of that is going to go toward student loans now? We are barely hanging on as it is……I am doing freelance writing to help supplement the grocery budget, which I can do from home since we decided to use one vehicle and share it. (And in rural Ohio, trust me, that is a sacrifice.) We pay cash for our medical care and medication, have pared our budget to the core, and weigh every penny we spend against the need for the product/service.
I fear, however, that adding student loan payments into an already frayed budget will push us over the edge. And this is IF I can find a job! If not, I can defer payment a while, but that is just delaying the inevitable. So what’s the solution? Why, get my PhD, naturally! I know of a friend who is working on his PhD on and off in order to put off paying on his student loans, and now I am considering the exact same thing. Which only makes the end result worse—higher loans. But desperate times, desperate measures, and all that jazz…………Wish me luck, and good luck to everyone else who is facing student loan debt right now." 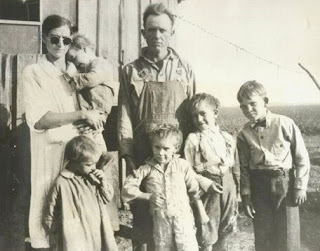 Eternal Recurrence? These boys helped their family out during the previous Great Depression. And the same goes for the Great Depression Deux . . .
Posted by Cryn Johannsen at 12:01 PM

Dammit, I'm nearly on the verge of tears.

I wonder - does the family qualify for SNAP? For a while there, I would've starved without it. Hurray for welfare! (Seriously.)

A family who is trying to make it. Good luck you guys! Stay strong!

Well, I just got my letter. What does that sound like: Uncle Sam is calling or something, uh? Well, this is basically what was said: it is time! And, I mean that literally :). I have deferred these loans as long as I can. I have my Ph.D, but not for the sole reason of deferment. I actually wanted it. Now, that I have it, I am making money teaching and facilitating, but... between the mortgage payment, car payment, light and gas payments, and others, I am still caught between a rock and a hard place. And, I have to get a bridge for my teeth, which is in the neighborhood of $4,000. and, then the loan kicks in later this month. It is so frustrating. I love my education, but did it have to come at such a high cost? Any suggestions on how we can get the government to at least allow us to drop the interest attached to these loans and just pay the loan off?? That would help. Come on and get on board with this one. This will be a step in the right direction. At least we won't feel as if we are being robbed!! Dr. V

This story is a testament to the many other families out there just struggling to get by. Has the family tried TANF(Temporary Assistance for Needy Families)? I wish them the best of luck and I hope that they can pay down their student loan debt.