The person who sells cashmere and can also discuss Dasein - Yelena features me on her awesome blog, Ivy Leagued and Unemployed

Many thanks to Yelena, over at Ivy Leagued and Unemployed, for featuring me on her blog. It's true. I can sell so much cashmere in an hour, I bet you would faint. I actually work so hard and move so fast - to avoid having sales stolen from me - that I have been pretty faint at work lately. Nice thing about springing in a department store? I've dropped at least one dress size since Black Friday (kid you not). Does that mean the recession is over, now that I'm sprinting to the back room to wrap up presents? Probably not. D.C. is a bubble, and many of the customers I help are from other parts of the country and live here for political reasons and so forth (they are diplomats, work for the World Bank, etc.).

I've heard some amazing stories lately, thanks to working in this area. One woman recently told me that she was slammed by shrapnel by a car bomb in Mosul. (She's a translator for the U.S. Army, and returning to that "very, very dangerous city.") The shrapnel landed in her uterus and she was flown to Germany for surgery. Another woman told us about the gold necklaces she was wearing. They were the most amazing gold pieces I'd ever seen on a person. I've seen pieces like that in museums, but never on a person. In any event, as she's telling a co-worker and me about her necklaces, where she got them (Iraq, Jordan, Saudi Arabia, etc.), she pointed out one particular ring. She said, "my Iraqi friend gave this ring to me. He was blown up in Baghdad by a car bomb." She quickly apologized, but I said, "there's no need to do that. It's your life. It's your story." I have to be honest, I've had to excuse myself after hearing these stories and cry a bit in the back.

Working on a sales floor and hearing those sorts of stories makes me realize that selling cashmere has opened me further to a complex world that's filled with both pain and joy (these tales and cultural interconnections are no longer tightly included in texts and discussed in cozy rooms in Providence or Cambridge). I'm also grateful to be working with lovely, hard-working women. They too are from all over the world. (One of them, a deeply religious Muslim woman, had to flee Afghanistan years ago - I have yet to hear her whole story, but she is kind and motherly. She likes to share her Kabob and rice with me in the back room. Her sense of humor is the best, and we hit it off immediately).

I am in debt and frustrated, but I am glad I work in retail - it reminds me of both the good and bad of humanity. But that's what makes live worth living. So . . . perhaps my education does matter. 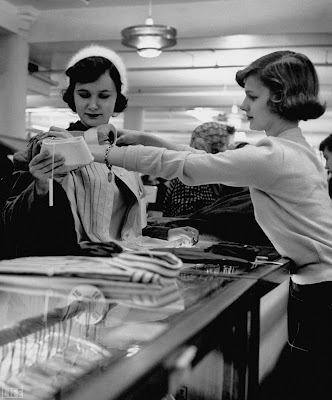 Your salesgirl can find you the perfect French linen shirt, and afterward she can tell you sexy stories about DaSein. Please ask for leather gloves too. If you do, she'll also share more theories about the complex development of German philosophical thought after Nietzsche at the same time!

You make me want to work in retail too Cryn! Glad you are enjoying your job. Keep up the good work.

This made me want to cry and buy cashmere from you at the same time. Great story. My education matters, and I am more than willing to pay what I owe which is 70,000, NOT the huge figure pinned on me now. But when I read your story and think of what's happening in the middle east, it seems...so.. small. Sometimes I need that.

Anonymous - hmmm . . . are you being sarcastic? I would hardly say I'm enjoying my work in retail. But anyhow . . .