Here's my latest piece at The Loop 21 about the Occupy Wall Street Movement. 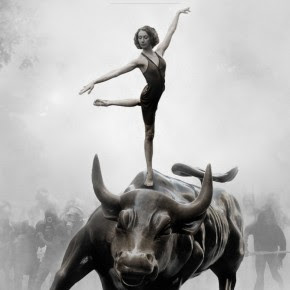 Posted by Cryn Johannsen at 8:12 AM

"Dr. Noam Chomsky, has come out in full support of the movement."

An honest man of sterling integrity. Good on him.

When I saw the viral videos of the police brutalising protestors, the police reminded me of Germany's Brownshirt thugs. I remind you I say this as a self-described right wing reactionary.

In all candour, what worries me about the apparent majority of those protestors, is their apparent physical weakness combined with a lack of self-discipline. Please hear me out:

In 1920s-30s Germany, the Brownshirts engaged in street battles against Communists. But the German Communists were highly disciplined and physically able and willing to fight back; obviously they lost in the end ("the wrong side lost AND the wrong side won"), but for reasons having more to do with their ideology's unpopularity than with force of arms.

But in contrast to Germany's left wing of circa 1930, these protestors aren't even competent fighters. And although pacific means of protest are ideal, pacifism doesn't signify much if it's involuntary. In other words, being UNABLE to resist violence with violence, is not the same thing as voluntary pacifism. When the obviously weak speak truth to power, power just laughs in their faces.

What I'm driving at here is that this movement ought to think about getting its sh-- together, including demonstrating its potential for physical violence, which does NOT preclude choosing the noble path of non-violence, but it makes non-violence a lot more powerful if it's backed up by potential force.

Similarly I think their endemic slovenliness weakens their cause. Appearances matter, especially in non-violent causes based more on symbols than on force. One relevant anecdote: When I was in college in the 1980s, I first got my name on an FBI list (so I discovered later) when I joined an organisation protesting against America's illegal covert wars in Central America. At one of our meetings, our student leaders planned to demonstrate on campus by dressing in outrageous costumes and banging cymbals, etc. I remonstrated with them, "Please think of how you'll be perceived. The majority of the audience whom you want to persuade, will write you off as marginalised freaks. In the Civil Rights marches of the 1960s, Reverend King and other leaders urged protestors to dress in their Sunday Best, so that no one could accuse them of being rabble. And it worked."

But no, my organisation's (and similar ones') leaders were more interested in self-indulgently performing the role of "radicals" in their own eyes, instead of keeping their eyes on the prize.
Consequently there was never an effective mass-antiwar movement in the 1980s, and Reagan was reelected in a landslide, and now look at what a mess America is in today.

I mean, come on, I've also experienced being an impoverished student, but long trousers and real shoes and an Oxford shirt and a blazer/sportcoat can all be purchased secondhand at Goodwill or other charity shops, and a comb costs around one dollar. If penniless African-Americans from Alabama could find ways to dress respectably in 1963, so can most of the participants in this movmement.

As noted in the article, the movement is spreading across the country. There are now over 45 cities carrying out similar protests. I'd say that's a movement.

Did you see that Susan Sarandon stopped by the protest on Wall Street?

OWS has a point about appearance, and neatness matters, but I have let my hair grow, and now it is getting pretty long, and I find that I get different reactions.

Some women, particularly over 40 women, seem to like it a lot, and others, such as younger men with very closely cropped hair, and multiple, visible tattoos, view me with what I take to be hostility.

But that picture of the ballerina on top of the bull is awesome!

Was it from the recent protests?

Anyway, where can I purchase a print?

As a former finance profession­al and lawyer, I tell you YES, the system is predatory, rigged against the middle and working classes, and the time is now to collapse it.

Wide-scale DEBTORS' REVOLT -- DEFAULT-EN­-MASSE is the answer, or at least part of it.

I am helping lead this effort, and our momentum grows. Join us. Walk away from your debt 'obligatio­ns', and help speed up the desirable collapse of the banking and predatory-capitalist system. Rebuild from there, under fair rules - responsible capitalism that recognizes the need for a economically strong workforce and middle class.

DEBTORS' REVOLT -- DEFAULT-EN­-MASSE. The critical mass is closer than you think.

The coverage on this has been abysmal. Here's a post from someone who was there and observed the protests. http://www.huffingtonpost.com/tracey-e-vitchers/occupyingnot-riotingwall-_b_980003.html

@Anonymous 1:17 AM - that'll change. We'll make sure it does. I am covering the story, and so are others.