I often think about gender and how it intersects with being an educated debtor. Many women have written to me, expressing their fears about never being able to have a family or owning a home. The option of domesticity has been stripped from many of us who are indentured educated women. While it was once enormously painful for me to accept that I will never have a child, I have now come to terms with it. (I'd really like to adopt, but that costs money, something I seriously lack!) And for those who have told me to have a child, and that things are always tough, i.e., that it's "never the right time to have a child," I can assure you that it is not appropriate or fair to bring a child into this world. I live with my in-laws. I can't buy my own groceries. How on earth could I justify having a baby? Of course, for those of you who have made the decision to have children, I respect that entirely. However, when it comes to my own personal life, it wouldn't be right. That does not mean I pass judgment on anyone who thinks otherwise. We all make different decisions, especially when it comes to intimate matters such as having a child.

I know I'd make a wonderful mother. Being a teacher and seeing how the children in Korea related to me so well made me realize that. Alas, it is not in the cards. And when I think about those children, my heart gets torn to pieces. I miss them terribly. So . . . perhaps I haven't come to terms with being childless? Perhaps . . .

As for ever owning a home? That is entirely out of the picture, and I don't really give a damned. As long as I can get back into an apartment, I'll be happy as ever.

I have also heard from women who are mothers. They fret about their indebted children. Those stories are heart breaking, too. They only wish the best for their children, and they feel helpless about the crisis. It hits them hard, because it is their child who is suffering from a broken, unjust, corrupted system.

Recently, I did some investigative work, and attended a talk for parents with college bound students. It was hard for me to remain quiet, because the room was filled with anxious parents. At one point, after I mentioned that outstanding student loan debt will hit $1 TRILLION in June of 2012, a father said, "college is a racket."

That father is dead right.

At this point, I don't want my nieces or nephews to go to college, and that is painful for me to state. After all, I was on a track to become an academic. Higher education is near and dear to me. But it's so broken at this point. It's been corporatized, and is now a twisted, absurd reflection of what it once was. I don't want my family members to suffer in the ways that so many of you are suffering. I also don't want their mothers to be tormented by the debt that they will acquire and most likely never be rid of. 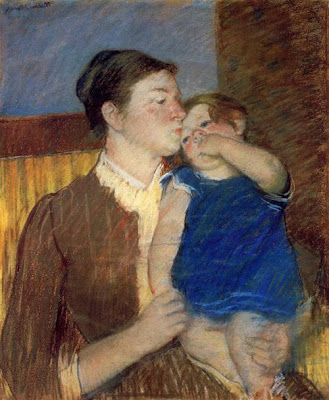 If I had just started a job out of High School, and never even taken out my first student loan, I would be a Daddy, most likely.

But then again, I would not be the same educated person I am now.

In the end I am childless though

I think women are just as susceptible to predatory lending for college. I know many woman who had children and realized they would need an education to be able to provide better for their families. It's not only married women either. There are very many single mothers out there taking out student loans trying to get their careers to go somewhere. With the enforcement for alimony and child support a great big joke, they have no where else to turn.

AprilDlicious: I see women like the ones you've described in my classrooms. Most of them don't have viable alternatives to going to school, which makes them susceptible to predatory loan practices.

Also, the majority of them end up--intentionally or not--in fields that are dominated by women, which pay less than other areas. That, of course, means they have a harder time paying back those loans--given, of course, that they get jobs. Plus, having to raise kids, usually by themselves, makes it even more difficult to pay those loans.

You're so young. Don't rule out anything just yet.

Trust me, life is long and what you're looking at now may very well seem impossible to overcome but I assure you, it's not. You're a well traveled, well educated and very street smart young person. In other words, the entire world is open to you. I absolutely realize how trite this sounds, but as an older person, it upsets me when young people lament what they thing are impossibilities - when to the outside world they're so clearly possible for you.

Hang in there. You and your husband will figure out what you need/want and how to get it.

As this was evidently inspired by personal suffering, I've hesitated to express any disagreement until I could find appropriately non-provocative words.

Here they are: This isn't really about gender. It's about the impacts of debt upon families and especially actual or potential posterity.

Re AprilD's "With the enforcement for alimony and child support a great big joke": The majority of divorces are initiated by women; almost 100 percent of divorces among couples with children are initiated by women; 85 percent of the time sole custody is given to women. Child support is routinely evaluated at the highest possible level in order for the state to receive Federal matching funds, and the amounts are routinely arbitrarily imputed above the father's available income. Inability to pay child support leads directly to imprisonment without trial, plus suspension of drivers' and professional licenses which further reduce the father's ability to pay. On the other hand, as the state receives no money for enforcing rights of visitation or access, mothers who violate court orders of visitation are virtually never punished.

These are the consequences of "no-fault" divorce, which has de facto rendered marriage contracts non-contracts by rewarding the party who breaks the contract. Want to see an immediate drop in the divorce rate? Establish a presumption of joint custody (except in cases of patent unfitness) and re-establish "at-fault" divorce in which the party who violates the marriage vows is the one who pays the penalty.

Cross-posted on my (our) friend JDPainter's blog, two songs I used to sing when I was a young troubadour in the American West, about MALE pain:

As ever, friendly and spiritually fraternal/sororal regards to my cyber-friend Cryn, whose wisdom and compassion resound even to the opposite side of the world.

@OneWhoSurvived - thanks to you as well, my cyber-friend. May peace be with you, brother.

And one more song by my muse Jim Croce, for Cryn, titled "Age":