Dustin Slaughter (@dustinslaughter) is the founder of the David & Goliath Project. He's been following the Chilean student uprisings closely, and recently wrote a piece called "American Students Should Take a Page from the Chilean Uprising." The suggestion that we as Americans take this as a model is well-stated.


Here's a truncated version of the piece:

“In the United States of America, no one should go broke because they chose to go to college.” – President Barack Obama, State of the Union Address, Jan. 27, 2010

Chilean society has been rocked by over three months of protests, beginning as a student uprising demanding affordable education and culminating in workers, environmentalists, LGBT rights activists, and others demanding reforms ranging from “building electric dams in Patagonia to improving education.”

The unrest began when students started taking to the streets en masse to demand “the elimination of a voucher system that supports private universities and demanding free, higher quality education at public universities.” The student revolt’s de facto leader, as it were, is Camilla Vallejo (@camila_vallejo) who has come to be known as “Commander Camila”. According to The Guardian, Vallejo has the ability to shut down whole sections of Santiago. Her call for better, cheaper education, has galvanized nothing less than a major populist uprising:

“Her press conferences can lead to the sacking of a minister. The street marches she leads shut down sections of the Chilean capital. She has the government on the run, and now even has police protection after receiving death threats.

Yet six months ago, no one had heard of Camila Vallejo, the 23-year-old spearheading an uprising that has shaken not only the presidency of the billionaire businessman Sebastián Piñera, but the entire Chilean political class.” 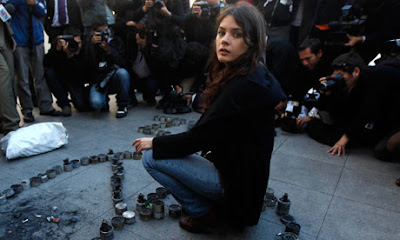