In November of 2010, I wrote about David Goodstein's suit against Kaplan. He came to me with his story about one of Kaplan's campuses in Pennsylvania. He alleged that they lured students into signing up for a surgical-technology program that literally had no end, i.e., the program could not be completed. The students were defrauded and left with mountains of debt. Goodstein, a high-ranking employee at Kaplan, was outraged by the situation, and took action. (Kaplan is owned by the Washington Post, which is one of the reasons they never write about the student lending crisis, and especially not the for-profit issue. In fact, they have come out in defense of the for-profits. But why wouldn't they? The paper depends upon those profits. So their writers, like Michelle Singletary, spews out positive-thinking mumbo jumbo about paying down debt. She always likes to highlight exceptional cases in which people have paid off their debt, and fails to discuss the fact that we're dealing with a systemic crisis. Here's the problem with that - folks on the Hill turn to the WAPO for big news items. They take a glance at stories that discuss debtors who take hiking trips or who have paid down their debt. Then they think there isn't an issue, and they move on. That's why WAPO has lost its journalistic integrity, especially when it comes to adequately addressing the student lending crisis.

The U.S. Department of Justice announced today that the suit has been settled for $1.6 million. Goodstein prevailed! The official press release can be read here.

I just spoke to David again and he has agreed to answer a few questions about the case, so stay tuned for his remarks!

Here's some other bizarre news about Kaplan. Bloomberg reports that a former dean of Washington Post Co. (WPO)'s Kaplan University unit was sentenced for threatening the school and Kaplan Inc. CFO Andrew Rosen via email and on the Internet. Bennie Wilcox was sentenced to 1 year and 1 day by a federal jury in Chicago. 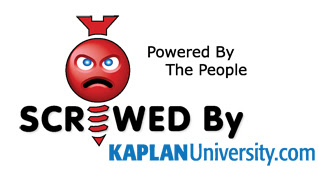 I have taught in a for-profit university. They do something the scambloggers accuse law schools of doing: fudging employment statistics.

The for-profits (at least the one in which I worked) like to say that some high percentage of their graduates were working in the field in which they studied within six months after graduation. Well, those schools enroll a lot of students who are already "working in the field." As an example, someone might work as a clerk in a hotel while studying hospitality management. If that person is still working the same job six months after graduation, he or she is counted in the statistic.

I'm glad he got some justice! Now the rest of us need it. I was screwed over by Kaplan and thier finacial aid department! They tried to get almost $3000.00 out of me so I could graduate! Before that they claim that they were missing documents from me that I sent to them over and over again! This University is a total scam and now I am stuck with almost a $3000.00 bill and 2 students loans and no degree!!! They need to be stopped completely!!! If anybody has a class action let me in on it otherwise, I'm thinking of starting my own if I can find a lawyer to take it.

Connie - I am sorry to hear about your experiences with Kaplan. I encourage you to keep coming back to AEM for updates. You're also welcome to send me an email (ccrynjohannsen@gmail.com). Spread the news about this case - it is a victory that people ought to know about!