Suit against Nelnet thrown out in Eight Circuit
The Eighth Circuit threw out a suit that was filed by a whistleblower against Nelnet, Inc. The whistleblower, Rudy Vigil, was a former loan advisor for the company. Vigil argued that Nelnet committed various acts of fraud, violating the rules and regulations under FFELP and therefore made the company liable under the False Claims Act (FCA).

Not all suits have had a favorable outcome for the company, however. Most notably, in November of 2010, Nelnet, along with other lenders, settled a suit brought against them by Dr. Jon Oberg. Oberg, a former researcher for the Department of Education, discovered that the company was illegally collecting millions of dollars in federal loan subsidies, and therefore stealing funds from taxpayers. Reporter Sam Dillon of the NYT detailed the allegations made by Oberg in May of 2007.  As Dillon reported, these "vast overpayments" continued for three more years, even though Oberg brought it to the attention of his supervisors. Oberg won and Nelnet settled for $55 million. The case revealed that the department allowed student lenders to draw cash directly from the treasury. Yet since the case was settled out of court, the public will not learn the details of the scandal. Of course, this is a common tactic for high-profile companies, as it allows them to resolve litigation problems quietly.
© 2009-2011 C. Cryn Johannsen. Simple template. Powered by Blogger. 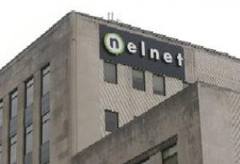 
Tim Lacy, "Modern-Day Hero: Jon Oberg, Former G-Man In The U.S. Dept. of Education," originally posted on History and Education: Present and Past, May 7, 2007.

Posted by Cryn Johannsen at 5:50 PM

I was just thinking about these pigs earlier. I owe these cockroaches about $32K, at 4.25% interest. However, my monthly payments are $211.26. I am on the extended payment plan, i.e. 360 months. I have been paying these thieves about $300 a month, to pay it off faster.

I will contact these pieces of trash tomorrow, and see what is going on. For instance, my wife owes these waste products about $25K, and her monthly student loan payment is about $117. She originally owed about $31K.

Have any of your readers been screwed over by Nelnet? I can provide original documents. (Of course, the Nelnet pigs make it so that you cannot print off older statements. I can still access my older statements, and I have written down the vital info.)

Nando, in response to your question: "have any or your readers been screwed over by Nelnet?," I can say that I have heard countless complaints about them. But in terms of firm figures, I can't say. They are, as you know, reviled.