'Til death do us part, unless we're talking about your student loans

So many of my readers were outraged by a recent piece in the Consumerist about a dead woman and her student loan debt. The woman graduated from the University of Kansas and died shortly thereafter from cancer. She owed $45,000 in student loan debt, so the lenders sent their collecting bloodhounds to terrorize her parents. As the article aptly states, "Because every grieving family needs to fight banks." Exactly.

Unfortunately, this story isn't remarkable. That's what outrages me. I've read several cases (and am confident there are more out there) about lenders going after those who have survived the indentured educated servant.

As many of you know, many of these loans follow you to your grave. That is not exactly comforting.


Lenders have certainly changed the meaning of hauntings, haven't they? Funny thing is, they've inverted it. Is it really right that the hauntings are being caused by the living? Lenders, I have news for you, you're fooling around with the wrong rules. You shouldn't be tormenting dead souls, and you shouldn't be demonizing their families. This will bite you in the ass at some point. So, yeah, good luck in the afterlife. 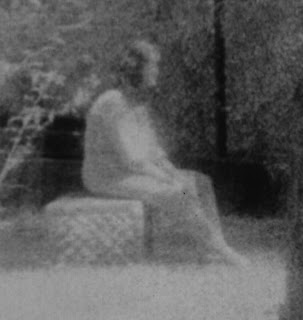 Image Of A Despondent Student Loan Debt Ghost
Posted by Cryn Johannsen at 8:34 AM

Have you seen Obama's proposed budget? It shafts students even harder on student loan interest. This guy rocks!

This pic reminds me of a Tennyson Poem called "Claribel"

And here it is folks!

At eve the beetle boometh
Athwart the thicket lone:
At noon the wild bee hummeth
About the moss'd headstone:
At midnight the moon cometh,
And looketh down alone.
Her song the lintwhite swelleth,
The clear-voiced mavis dwelleth,
The callow throstle lispeth,
The slumbrous wave outwelleth,
The babbling runnel crispeth,
The hollow grot replieth
Where Claribel low-lieth.

The budget would apply to FUTURE students, who quite honestly were being shafted by the school. I hate the mess that is our education system, but I really have no problem with the federal government refusing to pay the capitalized interest on six-figure loans for graduate students that won't be able to find jobs anyway.

It was just a giveaway to the banks anyway.

Yes, Obama's budget does shaft students, he and his party have intentionally harmed our cause and our futures through their choices to empower banks and allow them to enslave us while public money is spent on endless wars. Sallie Mae and the other student loan corporations will not stop preying on us until it is no longer legal for them to do so. The current government is responsible for not taking those steps.

I'm not saying this as a defender of the Democrats. Ben Nelson has probably done more to ruin my life than anyone ever elected to office. Seriously, he just sucks.

But Obama's been in office for two years. These problems mostly came about in the last decade. Some of it was under Clinton, who lost the midterm election and then let the GOP win some big, costly battles in order to save some other stuff. But most of it was under George W.

It wasn't Obama who made private student loans non-dischargeable, and it isn't Democrats who are keeping this incredibly stupid rule, basically a giveaway to the banks, on the books. You can hate the Dems if you want, but don't pretend that the last two years caused all the problems. It's just really not true.

Actually, it is the democrats who are keeping private student loans non-dischargeable in bankruptcy. They held a vote to restore bankruptcy protections to private student loans while they enjoyed their majorities in congress, and they voted NO; they also chose to dash plans to bring it up for another vote in the lame duck session. So really, excuses crumble quite easily for these rich, powerful politicians who squandered their political capital for years through their warmongering and corporatism until people finally had enough (and that includes Clinton, who lost congress, like obama, due to selling out his own base.)

The obama administration, the people he's appointed, democratic party politicans, and obama himself have choices, ones that they make every day, and should be held 100% responsible for; they are not victims or babies, and they most certainly could have taken actions on our part, but chose and continue to choose not to. I'm an indentured student loan debter, and I take offense to this; I care about my own situation more than I do the feelings people have for a career politician.

Liz, I am aware of all these things. I will still take President Obama to task, and for good reason. You'll disagree, but it's well-founded.