Part II of Who I Am: Retail Therapy and Graduate School Ennui

[Many of my readers have expressed interest in knowing more about who I am, so this is a new series that I began recently upon receiving so many of those requests.] 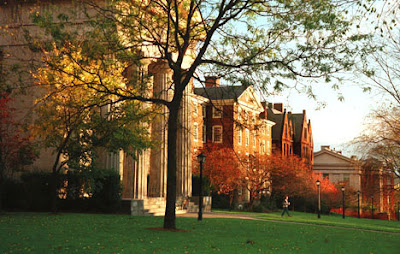 When I found God, I also entered the world of retail, a world that certainly seemed far removed from anything spiritual. But that was not the case. In fact, this glitzy space, that was jammed packed with glorious commodities, helped me get back in touch with a lot of holy things. In addition, it allowed me to pay homage (again) to Karl Marx, and in quite an unusual way. I realize he is quite passé these days, but with Retail Therapy, I hope to make him sexy (ha) in the twenty-first century.

So the world of retail was a blessing, and for so many reasons. First, it inspired me to write a 367-page manuscript, which has been given its final title, Retail Therapy. While I write The New Indentured Educated Class, I am also working on rewriting this work of fiction for the fiftieth time. Luckily, the burden of responsibility has not been placed solely on my shoulders. I have a co-author, Abigail Read, and she is playing an indispensable role in the final incarnation of this work. That means I have pulled it from the proverbial dustbins, and now have an outstanding co-author helping me rewrite it. Its tone is humorous, but the book definitely highlights the economic crisis that our country is still enduring.

When I began to write Retail Therapy, the economy’s seams were just beginning to unravel. So the timing was perfect for me to include the ghost of Karl Marx. Indeed, it is his luxury department store comeback! Luckily, the topic of the collapse of the U.S. economy remains relevant, so the content of the manuscript still stands. Thus, retail provided me with an unexpected type of education. Moreover, it was good to be away from the stuffiness of Brown. Even though I adore and adored my friends there – they provided me with an invaluable education, too – the whole environment became increasingly tiresome. I also found it particularly disturbing how the faculty, who had been there for decades (mind you, not all of them), were so painfully out of touch when it came to the realities of the job market. Again, my interview with Claudia Dreifus hits upon these points, and Ms. Dreifus does a superb job of analyzing reasons for why it is a problem.

For those of you who are in still academia, you are aware that it is a dismal situation. Of course the academic job market has been a disaster for quite some time, but it is definitely getting worse. And yet the schools manage to justify bloated administrations, over-paid presidents, and so forth. All the while they continue to cut tenure-track positions left and right. They have armies of adjuncts and graduate students, and these people are abused to no end. Adjuncts and graduate students generally have tenuous teaching schedules, no health care coverage, and have to work at multiple locations. So if someone tells me that the academy is leftist, let me take the opportunity now to say: take a hike. It’s been corporatized too, and that is exactly why we are in such a mess when it comes to the way in which higher education is financed.

It is a serious tragedy that these institutions have been taken over by corporatist. I think it is critical that higher education institutions have open discourse and represent various political views. In my view, these universities used to strive towards that ideal. That was before it was discovered that it could be corporatized, and that unwitting students could be turned into indentured educated servants. I mean, what better way to crush political activity (of any sort) than to burden educated people with crushing debt? It is a plan that made sense, and it is a plan that is clearly working its magic. Also, I am not talking about conspiracies here. These plans have been well-articulated by lenders and the institutions. The evidence is out there.

Overall, the academy disgusts me. That is one of many reasons why I did not wish to stick around. I refused to be a part of this insidious and immoral institutional structure.

So I became Catholic and at the same time left the protection of the academic world. To some degree, graduate school coddles you. For someone like me it was a way to remain distanced from public life and public problems. That is what graduate school was for me. That is not how it is for everyone in graduate school. But for many it is a way to avoid things. In saying that, I’m not stooping to that barbaric notion of hiding from the so-called real world. Save that drivel for someone else.
Once graduate school is over, you are in for a terrifying wake up call. While it was typical cocktail conversation to kvetch with my fellow graduate students about the shriveled and dead job market, the pessimism we reveled in together (and rightfully so), I realize now does not help to prepare those freshly minted PhD-ers on the actual job market. After so many conversations of this nature, it was time for a big change.

I thought I'd found a good place to begin a career in publishing, and so shortly after leaving academia I worked for a highly reputable publisher and respected the hell out of my manager (the guy is what I like to call 'scary smart,' and that's a compliment). However, my love for academia kept a strong, if not strangling, hold on me. All those depressing conversations I had had with fellow graduate students often centered on the issue of student loan debt. Although I received funding from the University of Chicago and Brown, it simply was not enough to cover all the expenses. That meant that I, like most graduate students, had to take out additional loans. We were all acutely aware of the fact that tuition had continued to increase exponentially over the past ten years or so, and we raised serious questions about why that was the case. That is how I soon found myself advocating for hundreds and hundreds of student loan debtors. At the same time, I maintained my connection to the Brown community, though, by helping graduate students with cover letters and academic CVs, focusing on transforming their academic work into something that applied to the “real world.”

I still advocate for debtors, and the number has grown to the thousands. However, my life changed dramatically once I left my publishing job.

[Stay tuned for the next installment of Who I Am]
Posted by Cryn Johannsen at 12:38 AM

I think the upcoming Elections will be key for the fate of Student Loan debtors.

Always curious, I listen to Glenn Beck, Rush, Hannity, and others on the radio during the day, and pretty much see how it is all going to go if the Republicans re-gain a majority. Nothing will change in other words.

But somehow I doubt that will happen.
The Bush years are still too fresh in everyone's minds (or at least mine).

Well, anyway, we don't have long to wait until Nov. 2.

JDpainterguy, thanks for your comments. It is my hope that those 8 miserable and long years are still fresh in people's minds (that includes Republicans who were infuriated with Bush for what he did to their party). As you imply, time will only tell, right. Nov. 2nd is right around the corner.

You're right. This will be a big day for student loan debtors. Although, the Dems have sold themselves out to the industry, too. But I'd choose them over the Republicans when it comes to this matter any day.

Cryn, where is part I?

Peter, if you click on the first hyperlink of this article, you can find it there, but here you go: http://alleducationmatters.blogspot.com/2010/09/part-i-who-i-am-why-education-matters.html