Jesse Jackson Has Aligned Himself With The For-Profits, And We Still Lack An FDR

Great. Jesse Jackson is aligning himself with the for-profits, and the Congressional Black Caucus is being lured in by the for-profits, too. (Luckily, the NAACP has not taken a stand like Jackson's). It's clear that the money is being thrown at them relentlessly.

On top of that, any Democrat is for sale when it comes to being bought off by this insidious industry. This industry should be treated like the tobacco industry, and that's what I dream of happening some day. However, if none of these people have the courage to take a stand and fight for student debtors, that will never happen ,will it? There you have it. Great day, right? Great news. What a friggin' joke. What a cruel, cruel joke. I doubt the student debtors are laughing about this news. Does anyone give a damned about the student borrowers?

To make matters worse, you have Michelle Singletary at the WP. Oh, yeah, she's a so-called expert on this topic. She's calling for an increase in Pell Grants. I call that a huge conflict of interest. So . . . you have the ads, the political contributions, the pay-offs to the interest groups, and this whole sorry for-profit mess is being paid for on the backs of taxpayers and students who are forced to borrow for their education.

Folks, today, is grim. I have mentioned many times that I'd like to run for political office so that I can be a public servant and be of service to the American people. But I fear that that isn't what this is about anymore. It's about being a shill, and pretending to care about your constituents at the same time. That's not an easy thing to juggle, I'll hand it to these politicians. Some may even accuse me of being entirely naive, and will let me know that politics has always been a mess like this . . . But I beg to disagree. We had statesmen like FDR in the past. He implemented one of the boldest programs ever, and it helped millions of people in the U.S. I realize that was a different era, but why can't we see that again? Why must we accept this sorry state of affairs? Why can't we have politicians with values and politicians who give a damned about the American people and not the lobbyists? 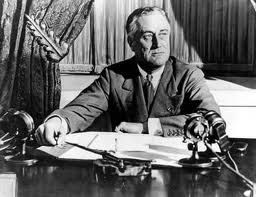 Posted by Cryn Johannsen at 2:04 PM

Please be glad we don't have another FDR.

One of the top 5 worst presidents of all time. Some will even say he is the closest the US has ever had to a dictator.

Yes. FDR was pretty damn bad. He "interned" a whole race of people. Apparently, it was the progressive thing to do world wide.

Why wouldn't Jackson back proprietary education? The government run system has been hostile to minorities.

He shouldn't back proprietary education because he should have a backbone. That's why. And your other comment about Jackson makes no sense. But I guess I'm utterly naive.

Jackson sold out lots of minority students - and low-income white ones, as well. Dems are spineless, gutless wonders. They have been co-opted by the same forces that bought and paid for the Republicans 140 years ago. Thanks for calling him out, Cryn. (If I wasn't married...)

Thanks, Nando. Here I was asked to be on a panel for student loan reform this past June, too. Obviously my suggestions to the Black Caucus and so forth were utterly ignored. I can't to include this in my book about this fiasco. What a crying shame. I mean, is this what MLK Jr. would have done? I don't think so?!?

I mean, it's disgusting.

I've made a point to send this post to my contacts at the Rainbow PUSH Coalition. It's just beyond despicable. As I said, however, at least the NAACP.

I appreciate the lovely compliment, too!

Perhaps Jackson is aligning himself with the for-profit educational sector for the same reason other African-American leaders and visionaries have aligned themselves with charter schools at the primary and secondary level -- the perception that (as the other "Anonymous" points out) the mainstream educational system is failing minority students, so they must look elsewhere for a quality education.

To be clear: I'm not agreeing with this view, per se, so much as articulating it -- and, like everyone else, I know horror stories of marketing to groups who feel disenfranchised by some traditional structure and so look elsewhere to have their needs meet.

BUt is this the new "separate but equal"?

@Anonymous 24 - thanks for your insights. They are greatly appreciated. I think you raise an interesting and disturbing question - "is this the new 'separate but equal?' What do you think?

Many African-American scholars talk about "social capital." Although most two-year and four-year public and non-profit institutions are "open admissions," there is still a "bureaucracy" that low-SES citizens find extremely difficult to navigate, according to "social capital" scholars.

The for-profit schools are economically-incentivized to walk low-SES students through the process by holding their hands. I think this is what Jackson is talking about. Because the for-profits' only revenue is based on their salesmen's ability to get students into federal students aid sources, they have a financial incentive to help applicants navigate the admissions and enrollment and registration processes. What happens after registration is often very bad, though. These students are not getting the level of education experience they would receive at a public or non-profit institution.

It's not surprising that people in positions of power continue to cling to the fall-back position "An education is the key to success..." and ignore the reality that students are often over-burdened by the costs of higher education. Much like the schools, the public figures don't really care what happens to the students after they graduate.

Cryn, I commend you for your advocacy on this issue. If you truly want to succeed in this effort, I advise that you focus less on those who are already in power (because they are unlikely to upset their cronies within the industry) and focus more on a grass roots effort. Specifically, I suggest that you aim your message at mothers. The victims of the education scam surely have mothers suffering with them who want to do something about it. Look how successful the MADD movement was!

I agree with 11:31 PM about focusing on a grass-roots effect. Focusing on the temporary political staff at the White House and DoEd has never been a successful approach. Another example, besides MADD, is the tax revolt of the late 1970s which focused on counties and state capitols. Eventually it made it to Washington, but it did not start in Washington. (Note that the tea party, in contrast with the late 1970s' effort, is ultimately doomed to failure due to its "let's start at 'the top'" approach. They need to re-group, re-think, and start at the grass roots.)

I too agree with 11:31 PM. I think your comments and suggestions are outstanding. But I also think it's important to call these people out when they do this kind of thing. For instance, a lot of his supporters whom I am in touch (people who help him shape his policy ideas on education and so forth) were very surprised when I alerted them to this fact.