[This series of conversations with candidates is part of a new feature on Education Matters. If you are a candidate running for office (city, state, or at the national level) and would like to be promoted on my site, please contact me at ccrynjohannsen@gmail.com. All candidates will have the opportunity to review the material I publish about them, so none of your words will be misconstrued. I'm happy to be of assistance in spreading the word about your candidacy, your values, and what you intend to do once elected.] 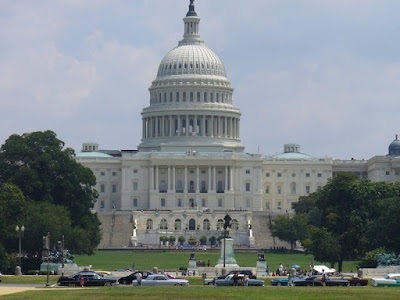 Graydon Carter recently remarked, in a piece about the dramatic formation of power in Washington, D.C., "Congress has become [thanks to the overwhelming influence of lobbyists and other special interest groups] a virtual prison to special interest, and is in many ways now defunct as a truly deliberative body."

That's why we need to elect a slew of populists and regain control of the legislative branch for American citizens (and those who'd like to become citizens for that matter). But more on that later.

In the past few weeks I have had the honor and privilege of speaking to several candidates who are running for national office. They echoed the same remarks as Mr. Carter, and firmly believe that things need to change in Washington. (Incidentally, I plan on interviewing as many candidates as possible before the mid-term elections). So far, I've spoken with Kevin Bradley (he's running for the U.S. House of Representatives, CO-5), Rick Staggenborg (he's running for U.S. Senate in Oregon as a Progressive), and Jim Holbert (who's running for the U.S. House of Representatives, KY's 5th Congressional District). I have several more interviews lined up as well. All of these candidates agree that things in D.C. need to change. Moreover, living  and advocating for student debtors in D.C. made me realize even more just how broken the system presently is. Mr. Carter observation is therefore something I'd like to focus on throughout this series of interviews with various candidates running for office.

A broken system does not doom us, however. That is why we desperately need change. So I cannot disagree with Mr. Carter's remarks. If we accept Mr. Carter's analysis, and I would assume many of you do, it means we have neither the time to despair nor the luxurious opportunity to merely critique a "failing government." This broken system must be repaired, and it is fast becoming my generation's responsibility to do just that.

But what about this word that's included in the title of this piece? That word - change - in the past year has been tarnished. Unless someone has been in a two year coma (and I'm using that word deliberately), we all know it is the rhetoric that was used by President Obama when he was running for office. Indeed, it was the crux of his platform, and what helped inspire millions of voters to turn out and elect him (I being one of them). Now both the left and the right (and everything in between) are tearing those words apart. So much for hope, right? This effectively renders the possibility for change impossible. Everywhere he turns, President Obama is mercilessly ridiculed for using such bold words. Even worse, the mainstream media has the audacity to compare him to the failings of President Bush. Talk about an effective way to diminish the change he hope to bring to D.C and to the rest of the country. And so across my grand, collapsing country the good ol' boys and hippies, the pretentious new-speak gossipers (who were formally known to be journalists) and ill-informed voters bemoan, bash, and berate the beleaguered President. It's much like Dionysus. Obama becomes the exalted God only to be shred to pieces much to the delight of all the spectators. In this way, we Americans have been able to, quite conveniently, conclude that President Obama is a failure (we are spoon fed this gruel by the babbling idiots on our TVs). That's why the media is a culprit, and would prefer - overall - to discuss frivolities (that's a tactic that effectively distracts us as viewers). They like to discuss what the President ate for breakfast or raise "penetrating" questions about whether or not he's a Christian, rather than focusing on issues that effect millions of Americans.

Indeed, it's so easy to believe he has failed the American people. No matter what occurs, be it a natural disaster such as a hurricane, the Great Oil Spill of 2010, increased unemployment, homes being lost, etc., etc., President Obama is to blame. Hell, I've blamed him for my own self-imposed exile. He's probably caused your toast to burn today!

So, yes, it's so easy to blame one man. I've done it (as I already said). Hell, who hasn't condemned him? And that makes it easy to forget who was in office for the past eight years (Oh, how I detest Americans' political amnesia).

But why do we place so much blame on the President and the executive branch for that matter? In my view, it is time to shift the blame and the raw critiques to another branch of government: the legislative branch. They are, after all, supposed to be direct representatives of the people.


In my next conversation with Jim Holbert, we will talk about the importance - the necessity - to reinforce the power of the legislative branch. According to Jim, their lack of power is one of the gravest problems when it comes to both national and local politics. This branch ought no longer be a virtual prisoner to special interest groups. This branch ought to be reclaimed by the people, and that's one of the reasons why I intend to also run for the U.S. House of Representatives.
Posted by Cryn Johannsen at 12:41 PM

Some of the schools whose graduates have the most debt are also among the lowest-ranked law schools out there. For example, Thomas Jefferson and NYLS feature the TWO HIGHEST LISTED average student debt loads!!

Take into consideration that these numbers are probably conservative. Plus, these averages do not tell the whole story. While some JDs took out $30K-$40K, MANY took out $150K+.

We need honest government with integrity.
“Good leaders create a vision, articulate the vision, passionately own the vision, and relentlessly drive it to completion”

Public confidence in the integrity of the Government is indispensable to faith in democracy; and when we lose faith in the system, we have lost faith in everything we fight and spend for.
As citizens of this democracy, you are the rulers and the ruled, the law-givers and the law-abiding, the beginning and the end.

Change is inevitable. Change for the better is a full-time job.

YJ Draiman - I commit more than 40 hours of week to making things better. This is more than just a full-time job, this is my life.