Debra Wiley at the Department of Education finally speaks!

"Knowing is not enough, we must apply. Willing is not enough, we must do." -Goethe
Recently in a piece entitled, "Who's gonna help students who have been defrauded?," I discussed the fact that there's been a lot of buzz about students who have been defrauded by higher education. In this piece I also implored the indentured educated class to reach out to Ms. Debra Wiley, who serves as the Ombudsman in the Department of Education.
This focus of what's happened to students has been primarily on that of the for-profit institutions. While I think it's a step in the right direction, and I especially applaud Luke Swarthout in Senator Harkin's office for his work on the matter (incidentally, I've been in touch with Luke by phone and email, so he's fully aware of this movement to help the indentured educated class), I also think it is far too convenient to single them out. The problem is systemic and much broader than merely the for-profits taking advantage of students. For instance, in a conversation I had with author Claudia Dreifus last week we discussed the way in which higher education institutions are not monitored in any way and are able to drive the cost of tuition without having to justify it. Her husband, Andrew Hacker, who is also the co-author of their recent book entitled, Higher Education? How Colleges Are Wasting Our Money And Failing Our Kids - And What We Can Do About It, recently appeared on the Colbert Report. Colbert did a segment on for-profit institutions (see the embedded segment below; Hacker was quite funny). That is quite exciting to see, but we need to taking aim at all institutions of higher learning. (I will be featuring Ms. Dreifus this coming week. She was gracious enough to be interviewed about her work).
Thanks to the indentured educated class we continue to collectively demand that individuals within the Department of Education and also elected officials. Our letters have, once again, made a difference. I also have to credit Ms. Wiley at the Department of Education for her response. After all, it's about time the Dept. of Education actually responded to our letters of concern.
As part of another letter writing initiative, many of you sent letters to her. One particular reader wrote on August 25,2010:
Hello Debra,

My name is Mr. Z and I have some questions for you
concerning the student loan crisis.
The Department of Education is failing to help current debtors. Why
have they forgotten us? What is being done to help current debtors who
can't afford to pay high payments for their student loans? Why is
there no relief for the citizens of this country that worked hard to
obtain their degree, only to be eternally indebted to private banks
(for private loans) and risk destroying their credit and possibly
losing their jobs due to defaulting on student loans?

Thank you for your time,
Mr. Z
I wrote a similar letter and asked all of my readers to cc me on their notes to Ms. Wiley. As mentioned, Ms. Wiley responded. She made it clear to Mr. Z that his concerns were being added to a file and that the White House was also aware of the requests that we have been making with regard to the student lending crisis.
So if you haven't written to Ms. Wiley, please do so now (her email address is Debra.Wiley@ed.gov). When you do, please cc me on that email. That way, I can keep track of the number of letters we're sending to her, too. I encourage you to ask the same types of questions that Mr. Z asked her.
This news is great. That's why we must continue to keep fighting for our rights. I also urge you to donate $5-$10 to the "Enough is Enough" Campaign. So far I've collected $529, and the campaign has only been running for a week! Please pitch in today. 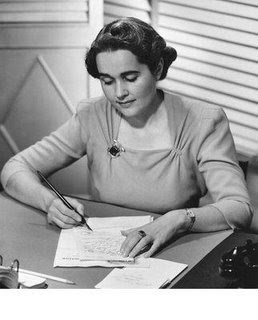 Posted by Cryn Johannsen at 7:14 AM

The DOE is focusing on the starting salaries, the percentage of income used to repay loans, and default rates several years out. A lot of the non-profit numbers are worse than the proprietary educational institutions' numbers. The DOE has turned a blind eye to the public schools and private non-profit institutions. This the usual political witch hunt. They need to apply their proposed rules across the board.

The only thing that for-profit schools have done is copy non-profit models in the private market.
They have not invented anything new...

The game is practiced by the deans and administrators in all the top 20 schools in the country.

The dean of my school lives in a $2.5 million mansion right across the street from the school.

Applying the rules "across the board" would be way off of the mark legally. Given the huge campaign donations that have come from the proprietary school sector over the past few decades, I am not surprised to hear this type of argument from Capitol Hill Republicans, but anyone who truly believes that the "across the board" approach is relevant needs to take a few hours and study the Higher Education Act.

As a result of gross abuses, particularly in the SLS portion of the guaranteed student loan program, a series of Senate and House hearings were held two decades ago. This is when a number of the oversight and program integrity features were enacted into the programs. Thousands of proprietary schools then left the federal student financial assistance programs (or were terminated by the feds) during the following few years. During the 15 years since then, however, the proprietary schools have steadily chipped away at the oversight and program integrity protections that had carefully been put in place. One of the things that galled the proprietary schools was their institutional definition, separate from IHEs. They wanted financial access not only to the student aid programs but also to the rest of the HEA non-student-based programs.

The bottom line is that things like gainful employment, recruitment, placement rates, and so on, generally apply in practice only to proprietary schools of higher education and certain other certificate programs, and this was the idea of the proprietary school lobbyists, not those who are skeptical of the sector. This was a way for them to stay in the federal programs while gradually moving into a position whether they could be treated the same as other IHEs. Furthermore, DoEd has difficulties, as it is, fulfilling its limited mandate, which in postsec, is primarily tied legally to institutions’ participation in the programs. If you don’t participate in DoEd’s programs, you don’t need to meet any of the federal standards, regs, statutes, etc.

Unlike many other countries, DoEd is not the national ministry of education. It doesn’t dictate the curricula for primary, secondary and postsec education, nor does it have supervisory authority over school principals and college presidents. Many liberals in the USA may quietly support the idea of a national ministry of education, particularly when the book-banning occurring at the local school district level is highlighted, but the fed’l DoEd never would have been approved by Congress if such was the case.

@Anonymous August 31, 2010 - you go on too many tangents for me to adequately reply in one response. I do, however, have one specific question: why do you bring up this idea of the DoEd not being the national ministry of education? What ever gave you the impression that I thought it functioned in such a way? I am aware that it is not, and that it doesn't dictate curricula in the same way that that entity operates in other countries. I do know that the DoEd ought to be helping current debtors, and I think it's egregious that it isn't. Moreover, I know of people who work for the DoEd and agree with that remark.

The DoE is in bed with the loan companies and guarantors. Miss Wiley should be trusted about as far as one can hurl a piano. Sure, her 'folksy' manner sounds comforting but make no mistake she is an EVIL cur. Trust NO ONE at DoE, they are up to their necks in fraud. An Wiley leads the charge. I wish her nothing but misery.

I have to agree with the poster about Debra Wiley. Sure, she'll speak to you and send leteers. But she's powerless. You would do better addressing a letter to the North Pole!

Saw some of the comments about Ms. Wiley of DOE. Not mentioned is that Wiley operates a sideline doing pro bono legal work out of her Alexandria Va condo for the very same clients she's paid by the Federal Government to 'police'. How this goes on year after year (not to mention her 155k salary (excluding bonuses) is an absolute mystery.

Some of these comments made me LMFAO. I don't think Wiley is still at the DOE. She certainly got a golden parachute.
My only question is, to paraphrase the kids,