Disagreeing With A Knowledgeable Reader

[The following post is the first of many in a series of responses to a knowledgeable reader.]

Readers' responses are meaningful to me, and I often like to post them more publicly when they are  noteworthy. The topic of the student lending crisis is heating up. My readers are also quite aware that this issue sparks all sorts of emotional reactions. I have Friedmanites who let me know why I'm in the wrong, liberals who disagree with some of my solutions, and an array of conservatives who either disparage my work or admire my critiques of the present Administration.

Naturally, I receive a lot of despicable comments quite frequently, and some of these remarks are just downright nasty. Recently I decided to post a negative remark with one that was insightful (see "Readers' Responses: Good Point/Wretched Point"). Something different, however, is happening on Education Matters. Something that's good. I'm noticing a distinct change in most of the comments. The inane, as well as (quite sadly) misogynistic insults are at a soft murmur, and the readers' response have suddenly become sophisticated, fair (if they disagree), and - best of all -  insightful.

One recent reader's comments deserves to be mentioned. There were several remarks made by this particular person, or at least I'm presuming it's the same individual. I may be incorrect in assuming that, however, the tone and style of each response is quite similar. Since this reader took the time to rebut my comments and, most importantly, my suggestions on how to solve the student lending crisis, I think they deserve a sound follow-up. Several, in fact. I'd also like to respond to their remarks and let them know why I think they're incorrect, or at least partially so. In my paper, "The Plight of Current Borrowers: An Appeal For Immediate Relief," that was presented at the Rev. Jesse Jackson's convention in Chicago, IL in mid-June (it was sponsored by the Rainbow PUSH Coalition, and the paper can be read in its entirety here), this particular reader took issue with the way in which I likened student loans to the subprime mortgage crisis. Here's what they wrote:


There is no relation or comparison of federally-guaranteed student loans to subprime mortgages. Most subprime mortgages were backed only by the faith of those who originated them. (A minority of them were backed by Fannie/Freddie, which were not federal agencies and which had, at best, only a vaguely-implied taxpayer backstop.)


The federally-guaranteed student loans (FFELPs), made by banks, nonbank lenders, state lending agencies and nonprofit foundations, however, were guaranteed 99% against default by guaranty agencies' federal government funds, which, in turn, had those loans guaranteed 95% by the actual U.S. Education Dept. After 6/30/10, there will not be any more of these loans issued, at least, and all newly-originated loans starting July 1 will be federal direct loans.


FFELPs were/are among the safest investments in the world. Defaults are very low, and, if the borrower defaults, sure the investor doesn't get the 20 years of future interest, but at least principal (including capitalized interest) is protected. In addition, the quarterly return is guaranteed by the taxpayer to be at a certain level, and U.S. Ed Dept covers it with quarterly payments to the loan holder. For the certain types of loans ("subs") where the borrower doesn't owe interest during school, the U.S. Ed Dept reimburses the loan holder for that interest.


The problem with U.S. and international "sophisticated" investors is that apparently they aren't so sophisticated. Three years ago they thought any type of loan imaginable was as safe as Fort Knox. By spring 2008, they thought all types of loans were as risky as an unsecured payday loan. Stupid. They missed the boat. While the investment "masters of the universe" can definitely do something about unfreezing the secondary and securitization markets of FFELPs issued prior to 7/1/10, there will be no new FFELPs issued.

These are great points, but I firmly disagree on several. (Incidentally, it's my hunch that this person is either writing from inside the Beltway or works at a higher education think tank somewhere in the U.S. Regardless, this individual is definitely informed about the issue).

For starters, Steve Eisman (who was the main character in Michael Lewis's The Big Short) last week testified before Sen. Harkin's committee. During his testimony Eisman argued that the student loan situation is comparable if not worse than the subprime mortgage fiasco. Moreover, if anyone is interested in revisiting or reading my own analysis of Mr. Eisman's initial remarks about for-profit colleges, please see, "Steve Eisman Blasts For-Profits, Arguing 'Subprime Goes To College.'"

It would be ludicrous to suggest that student loans are the same as mortgage loans. They are, naturally, two different things. The point that I'm trying to make is that the Administration and Congress have been falling over themselves trying to assist current mortgagees, but have done (with exception of IBR) nothing for current student loans borrowers.

As for the writer's last paragraph - it's great. I agree. A lot of these individuals in finance have no clue what they are doing.

Stay tuned for more responses to this reader's comments. On that note, thanks to those of you who are providing such substantive remarks. I am greatly appreciative. 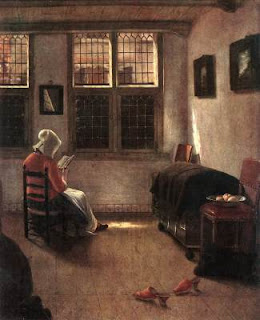 Posted by Cryn Johannsen at 1:28 PM