Big Gaffe By Sec. Arne Duncan or Harris Miller (the For-Profit Lobbyist in DC) on Frontline's "College Inc" with Martin Smith? I think so . . . why ain't nobody else talkin' about it?

In a recent story on Frontline entitled, "College Inc.," correspondent Martin Smith interviews for-profit ilk (particularly a so-called "Christian" named Michael Clifford) about their soaring profits and how great their schools are for populations who previously had no access to such great and . . . uh (ahem) PHONY and WORTHLESS paper degrees. (Blame a Ph.D. from Cambridge for unleashing this "market" in the U.S. of for-profits, who was none other than the founder of the highly hailed and fully federally funded Universities of Phoenix. Conveniently located at every highway stop every 20 minutes. But I digress).
Moreover, Sec. Arne Duncan was interviewed by Mr. Smith in a few segments.  Of course, Frontline showed some students who were deeply in debt with basically worthless degrees to show for it, after which Frontline confronted the proprietaries' lobbyist, Harris Miller.  Miller immediately said that if the allegations were true, the Department could cancel the debt.  Frontline then immediately switched to Sec. Arne Duncan, who seemed totally unfamiliar with his own powers, and denied that he could do anything about it. Yikes! Waa? Is he not aware of what he could be doing for students? Because if he were, I am pretty sure he'd be a huge hero, as would his boss, Pres. Obama.

So, was the gaffe that of Harris Miller's, for suggesting that taxpayers should bear the burden of unscrupulous schools and lenders? Yeah, that's a shameful position, but I am to believe that Miller is right in terms of the law, i.e. the Secretary has powers to act. If I were the Secretary, you better believe I'd be stripping these schools of their accreditation, so that taxpayers weren't subsidizing for-profit ventures.

Here's a quick list that the Sec., and his staffers with whom I've been in touch, may benefit from reading:
1) The Secretary can discipline schools, lenders, guaranty agencies, and even discharge loans in response to certain situations.
2) If the Secretary does not think current regulations are adequate, he can issue emergency regulations to protect consumers.
Since Sec. Duncan admitted to needing to do better, here are some questions I have for him: what has he done in his year in office?  How many schools, lenders, guaranty agencies has he disciplined in any way?  Has he even explored the possibility of canceling borrowers' debts for school or lender fraud?
If he has done any of this, it's news to me. Trust me, if it's been done, I'd be the first to let ya'll know and praise Sec. Duncan! 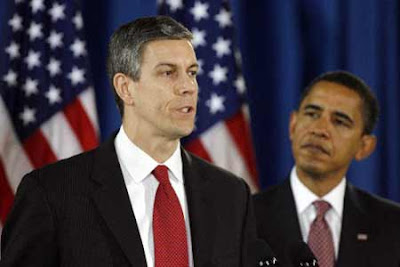 Posted by Cryn Johannsen at 1:01 PM

Duncan is, as with most at the Dept. of Education, is an ill-informed, ineffectual ninny.

No one at Dept. of Education seems to have anything intelligent to say about the darker side of student loans and for-profit schools. They let the lobbyists write policy and "police" the industry instead of doing it themselves. They don't care about protecting students, they care about getting re-appointed to their cushy jobs.

Thanks for posting. I appreciate it. First off, it's not worthless - it may seem like it now, because you're in debt up to your ears. However, and if you're serious, it's not worth dying for . . . NOTHING is. I mean that. Please reach out to me. I am putting together testimonials as we speak. There is a support group online, too (Support Group for the Indentured Educated Class). If you are serious, and you intend to kill yourself, you'll be sorely missed, and it won't be worth it. Moreover, if you are serious, please contact a suicide hotline ASAP (1-800-SUICIDE
1-800-784-2433). Sadly, I have known many who have committed suicide, so I take such comments very seriously - I've seen the loss and the pain.

Please realize you are not alone and don't let these bastards win! There are so many of us who have been victimized by these depraved and unscrupulous lenders and for profit institutions. Justice WILL BE served. When there is so much wrong how could it not? The truth will always triumph in the end. LIVE FOR THAT DAY. Our future generations will look back on this period and will be shaking their heads in utter disgust at how the current student loan fiasco was allowed to go unchecked.