How dare you say we're not experiencing a second Great Depression

Find the following links below. Don't worry, I won't even get into those for whom I advocate (they are suffering greatly, along with the poorest of Americans). So much for that change, right?

If we had good journalists and honest sources of news, we'd know that neither of these reports are "surprising." Also, if any of these journalists gave a damned, they'd be interested in the large number of student loan refugees who have fled the country for better job opportunities abroad. I am one of them. I wish I could be an advocate for student loan debtors and work for the Dept. of Education. Do you think they'd want to hire me? I'd like to think so, but I am growing more pessimistic by the day.

Or what about an organization who claims to be on the side of students? Ha. I doubt it. So, I write and write and write and organize and organize and organize from South Korea. I thank God for Korea - they hired me because of my background, degrees, etc., etc. I couldn't find that in my own country. That's a crying shame. But I don't feel bad about my circumstances. As I just said, I am grateful for South Korea. It's a privilege to teach these children. Arne Duncan could learn some lessons about education (K-12, etc.) from the South Koreans. They seem to have this education thing-a-ma-jig put together far better than we do. Moreover, we could learn some lessons about how to finance higher education from other countries, too.

Since I couldn't find a job in the U.S., I probably won't be able to make a convention I was invited to by the Rev. Jesse Jackson about student loan reform. Oh . . . the irony.

Right now, I feel like a HUGE FAILURE. I feel like I've failed millions of people who are part of the indentured educated class. That's doesn't make me wish to give up but fight more. But it still makes me so enraged and terribly sad. 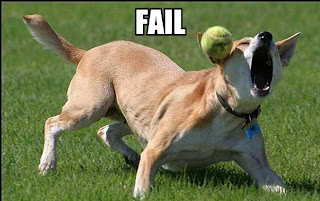 Being a failure as a student loan debt advocate isn't as cute as this guy . . .
Posted by Cryn Johannsen at 2:11 PM

I have not failed. I've just found 10,000 ways that won't work.
- Thomas Alva Edison
And so we forge ahead with you as our guide, me Leni, Nicholas, Diane and the thousands of others who are attempting to "Fight the good fight". You are by no stretch of the imagination a failure. Please keep up the great work you have been doing for all of us, and thank you so very much for every bit of it.
Gail-KY

You are an expatriate who is still fighting for the U.S. You are not a failure. You have been failed.

Thanks to you both - I do, however, feel like I have failed so many of you . . . that's devastating to me.

do not be defeatist.. .. go get some sunshine and live to fight another day!

some of us have been fighting this fight for a long time 20+ yrs. . .everybody just thought it was us. . .we thought maybe it was just us too.

be the cat and hang in there baby!

Public education is the best means of moving out of poverty and also strengthening the human capital of our nation.
We must continue to battle for well-funded, well-resourced public schools and greater opportunity for higher education for all students. Other countries with much less resources are doing it.