"What's all THIS fuss about?"(*sniff, sniff) - The Silence And The Form Letters = THEY DON'T GET IT

It is my understanding that many of you who have taken the time to write to your representatives have heard nothing back (I, however, wish to thank you again for your efforts - it matters to me).

It's not a matter of their offices being burdened by letters or other dilemmas (insert health care reform catastrophe here). In many cases I've been told that there's been no response for 6-8 weeks. That's inexcusable, and it also suggests to me that people on the Hill and (gasp!) in the White House don't understand that there is a student lending crisis. In short, they just don't get it. Do they? [Note to the White House and the Hill: prove to me that you GET IT.]

I am not sure what's worse - this silence or the ridiculous form letters (one person received a form letter about health care after she took the time to send her Senator a note about the student lending crisis). As for me, I recently received a form letter from Sen. Webb's office (D-VA). Someone pieced it together in the poorest fashion. They wanted to let me know that they are pursuing programs that will increase Pell Grants, blah, blah, blah. Is that what I'm writing about? Am I asking them to expand programs like that? No, I'm not. So, that's the best they can do?

Mind you, Sen. Webb's state is home to the infamous Sallie Mae. I have a hunch that they spend a lot of time in Sen. Webb's office.

Why is it the only Senator's office who seems to get it is Sherrod Brown's office?

It also seems clear that nobody on the Hill or in the White House is paying much attention to his private debt swap proposal, and that's a big shame.

The Democrats have an opportunity now to take a stand on this issue. At the moment, people are being attacked online. They are being told to "get off their butts" to get a job. They are being told they are lazy, pathetic, etc. If only the Democrats could seize this moment and send a message to counter these nasty remarks (they're widespread). We don't want a hand-out (they gave that to the banks). We want justice. That's different. We want those in power to change this injustice.

But they remain silent. I don't think that's gonna help them in their upcoming elections. So, here's my question: do they care? 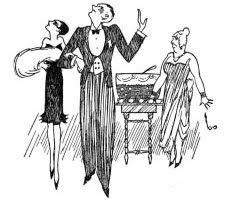 "What's that you say? Hmmm . . . something about this, uh, indentured educated class?"
Posted by Cryn Johannsen at 11:23 AM

Of course they don't care, there is nothing in it for THEM! Our government officials have proven over and over again that they are the largest group of narcissists to congregate in a 10 mile radius in the entire world!

I can't imagine a worse idea than those at goooh.com Absolutely the best way to keep big business and corporatations in power is the goooh.com Well meaning ordinary citizens will do what they are told on defense, terrorism, speech and other issues. Sorry, but goooh.com has it wrong. The ONLY part of our system that works is the part that the most distant from the idiotic electorate: the judiciary.

The real question is when are people going to wake up and realize that the Democrats are republicans in sheep's clothing and that there are barely a handful of Senators and representatives who give a damn about us.