MUST SEE Infographic: What Rising Student Loan Default Looks Like

Stay tuned for more updates on the unfolding story about the Department of Education's SWAT Team fiasco. I'm covering that situation closely. In the meantime, take a look at this terrifying infographic that was just put out by EduLender.

This is a new series that EduLender has launched. These visuals will highlight various topics that concern higher education. The first one depicts student loan default. EduLender has found that 41% of student debtors have either defaulted on their loans or are delinquent. This fact again is a why DC needs to open their ears to our pleas and do something about the student loan debt crisis. Regardless of the Dept.'s involvement in the situation in Stockton, California, the damage has been done. The Department looks callous as ever. That is why the video has gone viral. It shows how people perceive the Department of Education. Folks there need to know that they are hated. People despise them as much as they despise Sallie Mae. Too bad the Department has never bothered to have a conversation with me. I've been brushed off so many times, it's laughable.

The man in Stockton is another part of this perfect student loan debt storm. 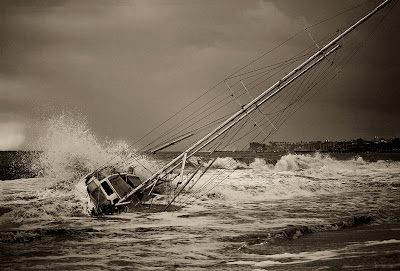 Posted by Cryn Johannsen at 3:40 PM

This is apparently the current definition of "fraud & embezzlement" ie. the borrower didn't repay their student loans thus are guilty of fraudulently embezzling funds belonging to the United States Government. Therefore, we will break down doors to bring the perps to justice.

Welcome to the new Amerika.

That is a completely incorrect citation of the data. That data is a snapshot, and is actually only the first step of a planned, two- or three-step lengthy analysis which will eventually look at the issues you cite. As of now, you are ahead of the analysis and making assumptions. As of now, all that you can say is that, of the borrowers at those five guaranty agencies who entered repayment, 40% have been delinquent or in default AT ANY GIVEN TIME within the first six years of entering repayment.

These are temporary situations, particularly delinquency, in which an incredibly high percentage of borrowers are temporarily up to 60 days delinquent early in their repayment lifecycle. Reasons include (1) many people move/re-locate after graduation/drop-out to take their first job/new job and (2) poor enrollment tracking by schools resulting in lags in learning that someone has dropped out. Later in repayment there are still people moving in and out of delinquency "harmlessly" and under the radar. If they are 90 days delinquent in any given month, this slightly damages their credit history, but the damage is limited as this is a temporary situation. The damage to credit is not nearly as bad as a default. The point is that this is constantly in flux. It is 180 degrees incorrect to assume that "once delinquent, always delinquent."

Even default is not as permanent as the media promotes, as 20 percent rehabilitate, erasing the default from their record. Some of those borrowers re-default, but this also goes to show that these situations are not permanent. And not all are "deadbeats." Many will pay as they can and will eventually get out of default without rehabilitation. The media constantly confuses the difference between (1) where a loan is on a particular day vs. (2) where the loan has been over time.

@Anonymous June 9 3:04 AM - you sound pretty irritated. For whom do you work?

Thanks for sharing your concerns, Anonymous (June 9). Obviously, delinquency and default are temporary situations which can vary in their duration and impact. Our concern at EduLender, a concern shared by many across the country, is the incredible number of student borrowers that find themselves in one of these two situations. As you plainly know, these problems—however temporary—can have serious consequences on borrowers’ credit histories.

As EduLender’s staff are overwhelmingly recent college graduates, we are keenly aware of these consequences and how they can affect members of our age group. Particularly if a borrower has not accumulated much of a credit history, delinquency and default can raise a his borrowing costs and delay important milestones in his life. A borrower who entered delinquency or default may have to put down a deposit to pay for basic utilities, may have to pay more to obtain a cell phone contract, and may find it harder to put his name on a lease or a mortgage.

@EduLender - thanks for your follow-up response. You are absolutely right. This concern is shared across the country, and that's why it is important to provide the information about default rates and an increase in delinquency among borrowers. Keep up the great work!