What The Protests In Wisconsin, Ohio, And Indiana Mean For The Indentured Educated Class

If you decide to declare class warfare on the poor and the ever-shrinking middle class (soon to be extinct, or so it seems), and yet insist that austerity measures are the best for everyone, you will end up paying a heavy price. Take a look at this chart that shows class warfare. What a perfect display of how unjust and inequitable our society has become. I have news for those of you who think that we all believe that tax cuts, and budget cuts, and all other kinds of what-what cuts are for the common good. A large majority of Americans know those claims are bullshit. We're onto your lies, and that is because so many of us have worked our asses off to help our communities, to help ourselves, and to be a part of the democratic process, and yet we're slipping of the societal grid. We're disappearing.

Higher education is under assault, and it has been for a long time. It has adopted the worst models from the corporate world (so the institutions themselves are also to blame for the crisis). There are things that ought not be a part of the market or the private sector. Of course, you, Mr. President, wouldn't agree with that. That is because you are a victim of neoliberalism. It's shocking to think that at one point you were a community organizer. Does your old self ever come to you in dreams and ask you why you betrayed the people who put you into office, and why you betrayed your previous values? (Perhaps you are merely a political animal, so your old self, even if he does ask you such questions, means nothing to you).

These last few weeks have been astonishing. Wisconsin is not the only place where people are raising hell, and we stood and watched in awe at what happened in Egypt and elsewhere in the Middle East. You see, we're tired of seeing our future and country (as well as countries) being stolen from us. The youth are especially angry. You have no right to take our futures away. No right.

So what do these protests mean for the indentured educated class?

It is perhaps too early to know, but something dramatic is happening. Never in my life could I have anticipated a revolutionary spirit like this one - it is something I hoped for in my early 20s, and now I think it is finally happening. We are realizing that our America is being taken from us, and people aren't going to stand by and let it unravel. It is exhilarating to know that so many Americans want something better - they desire equity. Sadly, the desire for things to be fairer for all is regarded nowadays as radical and threatening. Well, we're going to change that attitude. Welcome back, working-class America! I sure have missed you.

On that note, I want to give a special shout out to the farmers of Wisconsin who rolled in on their tractors today to support their teachers, police officers, fire fighters, and other union workers. 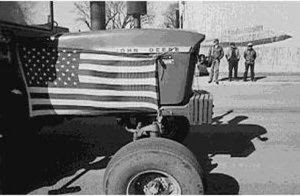 Obama is a neo-liberal. Others have noted that Obama is an admirer of the piece of rotting waste known as Ronald Reagan. Even Clinton was a "New Democrat." This country is firmly in corporate control - and has been for some time.

A CEO, a union member, and a tea partier are in a room together.

A table stands in the center of the room.

The CEO takes 9 of them and looks at the tea partier and says, "Watch it, That union guy wants your cookie".

When Obama tried to fill his campaign pledge and close Guantamo, conservatives freaked out about "moving terrorists to American shores..." and no one on the Left did anything about it.

When he tried to hold trials in New York City, as an inspiring and real-life embodiment of the principal, "We don't need to be a slave to our fears..." conservatives freaked out about "Shutting down the NYC economy..." and no one on the Left did anything about it.

But now the people who were NOWHERE when Obama tried to change, are all, "Hey, what happened to Guantamo? Wasn't someone else supposed to fix that for us?" What did you THINK was going to happen when a well-organized and well-funded opposition faced off with... pretty much just the president, most of the rest of the party, and definitely a lot of the now-critics, were AWOL.

I wish Obama could do more too, but honestly, I don't blame him for not taking the executive power to its furthest limit on every single possible issue - it's been MORE THAN CLEAR that whatever position he takes, he'll put up with an epic and dishonest freakshow from the right, while way too many people on the Left whine about specific policy positions rather than getting out there and fighting.

Things are finally changing - Wisconsin has me very fired up too - but I don't want to let the Left off the hook with some easy criticism about Obama. WE ALL let this happen, and the things that were accomplished were, to be honest, kind of miraculous, given the intense and well-paid opposition.

I love that union joke!

A CEO, a union member, and a tea partier are in a room together.

A table stands in the center of the room.

The CEO takes 9 of them and looks at the tea partier and says, "Watch it, That union guy wants your cookie".

Then the union guy speaks up and says "Hey tea parties, can't you see that the CEO is the real problem? We need to unite against evil corporate America."

So, the CEO gives the union guy 3 of his cookies.

Tea partier looks at his one cookie and union guy's three cookies and says "Would you mind giving me one of your cookies so we can be even?"

Union guy says "Fuck no! I earned these cookies and they're mine."

Did any of you see the 2010 election returns? Where were all of the outraged demonstrators when they had a chance to keep the Dems in control of the House of Reps? Where was the "large majority of Americans" cited above when it mattered?

Now the Left will be immensely fortunate to keep the Senate in 2012, mostly because the Dems have more than twice as many seats to defend as the Repubs. It does look like Obama will be reelected but without control of Congress, NOTHING will change in the bankruptcy or other laws and spending decisions will be largely dictated by the Repubs, with only Obama's veto for defense.

And I don't understand Cryn's harsh treatment of Obama. No one to the left of Obama is electable and even he must move to the center for purposes of reelection. If he somehow loses in 2012, the Repubs will run wild. Again, just revisit the 2010 election results - it was a bloodbath on the federal, state, and local levels. Just my two cents.

I drafted a long list (13 points with links) for why I continue to criticize Pres. Obama. I lost it! Even though I copied and pasted, I made a terrible error and lost my response (I had to ask my husband for a hug, and then I got back to work). Since I respect all of you - even when we disagree strongly - I have drafted a new version and will be putting it up as a post. I am going to quote a few of you as a departure point for this piece. Thanks for the feedback and willingness to debate about very important issues.

I just drafted a 1 point list for why I criticize President Obama:

1. Obama, like virtually every other elected representative in Washington, as well as the voters who support them (from either party), places politics above government.

"Should we do this?" takes a back seat to "will we win the next election?"

I am a bit confused by your position on the Wisconsin union issue. You claim to represent the indentured educated class, but are these class members largely indentured due to the fact that public and private non-profit university tuition increases over the last 20 years have vastly outpaced inflation? Isn't the largest expense for universities labor costs? Isn't a big chunk of the money that made you indentured going to make sure that baby boomer professors have comfortable defined benefit pensions, lifetime healthcare benefits, low-workloads, tenure and nice salaries?

Professors aren't unionized. At least at my school, the professors made up to a quarter million a year, administrators made six figures, and actual staff were all in the low, low five-figure range.