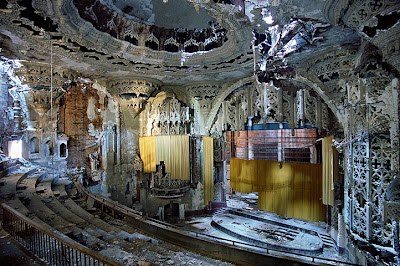 The ruined Spanish-Gothic interior of the United Artists theater in Detroit. C. Howard Crane built the cinema in 1928. Photograph from the collection, "The Ruins In Detroit," by Yves Marchand and Romain Meffre. Special thanks to Mr. Marchand and Mr. Meffre for agreeing to let me use their photography for this important conversation with Alan.
If you have not read the other parts of this interview, please do so! Alan is an engaging and insightful conversationalist. I hope he will join us again at AEM's blog! For those of you who are now reading-contributors, I want to thank you for your continued support and donations. If you haven't become a reading-contributor, please donate today, and help us build on AEM's strength. You can either donate via PayPal or by check/money order.
Part I
Part II
Part III
CCJ: I agree entirely with this point you mentioned earlier about the student loan crisis being a ‘whole new kind of misery.’ That’s why AEM continues to advocate for the indentured educated class.
AN: It's exploitation and people are being ripped off. These stories speak real cruelty. The idea that government should be a predator in the ways these hideous for-profits are . . . it's dispiriting.
CCJ: I am actively discussing and promoting the $1 trillion 'magic number.' In 2012, outstanding student loan debt (federal and private) will be at $1 trillion. How does that bode for the health of the U.S. (both economically and culturally)?
AN: It really doesn't bode well. It is a factor that will depress real income for generations of working people, whose incomes will be depressed anyway, and that has to do with the decline of American capitalism. We’re anticipating a low-wage country, where most workers will be paying in interest payments on their outstanding debts what they used to pay in taxes, because so many public services will become privatized. It's going to add insult to already existing economic injury. You’re adding debt to a population already indebted on so many fronts, and who have to take on even more debt.
The Fed puts out this Gray Book, and it was I think in 2003 that the quarterly report noted this striking change. More wage earners were using credit cards in ways they hadn't used them before, and that was for basic necessities.
CCJ: I am aware of the findings, and it’s troubling.
AN: Yes. That means people are using credit cards for food and gas and other essentials. Increasingly people have to rely on debt. During the ‘Golden Age,’ credit cards were used to buy consumer durables, a car, a fridge . . .  Now, people are going into to debt to buy a Mounds bar, that is not a good thing, and I don’t think I’m exaggerating entirely! [Laughs]
CCJ: No [laughing], I don’t think that is really an exaggeration. That’s terrible, too.
AN: So using credit cards in this way is adding to an already crushing burden. I talked earlier about standard Keyneisan progressive policy. If you look at history, from 1950 up to today, the effect of Keynesian policy on employment . . . his main priority was to address unemployment. Look at each economic downturn or recession since 1950. You find that each downturn had fewer short term unemployed numbers (14 months or less) than the previous one. The short-term unemployed have been declining as a percentage of the total number of people unemployed. If you look at long-term unemployment figures, those in that group have increased from recession to recession. In other words, long-term unemployment has been steadily increasing since 1950.
That underscores how standard Keynesian macroeconomic fine-tuning has really failed in terms of addressing the employment issue. To repeat an earlier point, policy makers are misguided in wanting to stimulate output rather than jobs. In fact, the principal beneficiaries of current policy have been higher educated, higher paid people. My recommendation, that government directly provide employment to specific workers in specific areas, is a class policy. It aims to improve the condition of the working class. This is explicitly contrary to government policy since 1980, which primarily benefits the rich. I’m talking about progressives openly embracing class politics.
In my view the composition of the unemployed population is a good indication of where things are going. Obama and the rest of the liberals believe in this bastardized form of Keynesianism. That is the regime that student loan debtors are going to be living under.
When it comes down to it, the answer to your question has to be far reaching.
CCJ: I realize, it’s not the best question.
AN: No, it’s a good question. It’s relevant to student debtors, because they are not just student debtors. They will figure into the unemployment statistics and will become the low wage earners. In that way, the future looks grim. So, it’s not a bad question. For you and me, the answer is obvious, but for readers, it suggests that there are implications for the future.
CCJ: And, as I already said, you are probably aware that outstanding student loan debt – both federal and private – will hit $1 trillion by June of 2012. That’s why $1 trillion is my magic number, and not in a good way.
AN: Now you have this current default rate and then you add $1 trillion in outstanding debt. The implications for what these lives will look like, and we’re talking about past and current students, and what their children’s lives will look like . . .  They will not be a position to help their kids at all, because they will be in a much worse position.
CCJ: I agree. It’s not good. That why AEM continues to fight on behalf of the indentured educated class. Thank you so much for having this conversation. It has been an honor and a privilege, Alan.
AN: Thank you for having me, and keep up the good work.
Related Link
"Cockeyed Economics," Counter Punch, Oct. 9, 2009 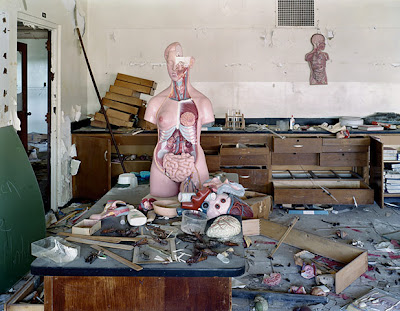 Biology Classroom at George W. Ferris School in the Detroit Suburb of Highland Park. Photograph from the collection, "The Ruins In Detroit," by Yves Marchand and Romain Meffre.
Posted by Cryn Johannsen at 5:15 PM

Is inflation the solution??? How significant is $1 trillion in debt if a dollar is worth a fraction of what it used to be? The national debt is over $13 trillion. So what? The gov't could print that amount tomorrow and pay it off. Inflation would dilute people's savings (less purchasing power), but is there a better alternative? What is Ben Bernanke and the federal reserve doing?

Those pics are really creepy. Especially the biology classroom. I think I'd be pretty scared walking around there at night and in the dark. It reminds me of pics of Hart Island, in NY, where there is a potters field, and other buildings nearby scattered with neglected remnants of the past.

But I'd like to share that on my blog I get traffic from Australia, and commenters have recommended that I leave the US and go there to start a new life, where the economy is better.

But the thought of doing that is painful, because my Family is here.

@Anonymous March 6 - I do not follow your logic. Sorry.

JDpainterguy - why not go to Australia? I mean, if you didn't like it and it didn't work out, you could always return home. Of course, I don't know your circumstances (perhaps you have an older relative who has health problems). But I left for Korea and it was great. It's nice to be in a country where things aren't being pulled apart. I miss that about Korea. The U.S. is depressing.

Paul Krugman did a much better job in today's op-ed then I did of expressing what I tried to say in my comments to the third installment of this interview:

This is not a simple Marxian case of the 'rich getting richer and the poor getting poorer', it is considerably more complicated but would better be expressed as 'part of the middle class is becoming rich and part is becoming poor, there will soon be a much smaller middle class'.

I don't think Nasser is recognizing how this distinction complicates any kind of class-politics response. The emerging economic condition will involve both a large income inequality (not the very rich vs. the rest of us, which is largely irrelevant despite the wailing of progressives to the contrary, but the inequality between the fairly-well-off and the not-well-off which will be the primary source of friction) along with substantial class mobility, both in the form of people raised in the not-well-off class becoming very successful and in the form of well-off children dropping into the not-well-off class.

It is at best wishful thinking to imagine a class-based policy being politically successful in this environment. Americans have always been hesitant to vote for punitive measures against another class if they think they or their family members will be part of it in the future.