Indentured educated servants: prepare yourself for some intense battles. With little resources to promote our voice inside the beltway, the recent developments attacking the gainful employment rule are worrisome. In addition, we have a new and despicable sheriff in town, Rep. Virginia Foxx (R-NC). But when it comes to the attacks, I doubt anyone saw these things coming, especially with regard to the proprietary schools. They're winning, and it is a crying shame.

Foxx is now the chairwoman of the higher-education subcommittee in the House of Representatives, and she has allies in the banking and student lending industry. She is against any form of regulation, and is targeting the gainful employment rule. Pell Grants are also vulnerable.

She also hopes to slash the budget of the Department of Education, and in ways that are not good for borrowers.

It sounds like those within the Department aren't too concerned. For instance, Eduardo Ochoa, assistant secretary for postsecondary education at the U.S. Education Department, stated that the new rules will probably not be disconcerting for the proprietary schools. He added, "The regulations as they come out are going to be significantly different—I think they're going to be better, nuanced, and I think that there's a lot there that people will appreciate having other views reflected."

When someone like Ochoa uses words like 'nuanced,' that is code for the following: "we've been lobbied and pressured so hard, that we're going to cave to the demands of the for-profit industry." Well, we can all rest easy, knowing that the very schools that ought to be regulated are drafting the new rules. After all, that is the way things work these days in Washington.

If these are Foxx's plans, you can imagine what that means for current borrowers who need relief and immediate solutions. Rest assured, I'm working on angles and have some propositions out there.

That's why we need to organize and demand answers from Congressman Virginia Foxx. 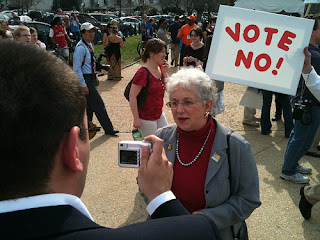 Shame more people didn't vote that way in her district.
Posted by Cryn Johannsen at 11:46 AM

Virginia Foxx is a joke. She gets re-elected every 2 years based on gay bashing and anti abortion rhetoric. Her yokel, inbred, jeezus freak constituency eats that up and now she has committee authority.

I can tell you are as delighted as I am about her committee authority.

Great to hear. If you wish to join our letter writing campaign and share your thoughts on how to go after her office with questions, please free to join us.

The industry under pressure to be regulated usually drafts the regulations. This is nothing new.

You have either a sarcastic or intentionally provocative headline. Everyone above age six saw this coming. And it isn't simply coming (as if coming means something that will occur at some vague time in the future), it was there from the beginning.

Ever since a brief set-back during the 1987-92 period (including the creation of "cohort default rates") when there was a bipartisan consensus to shut down thousands of shady trade schools who had abused the federal SLS loan program (re-launched as "unsubsidized Stafford" in 1992), the proprietary schools have lobbied consistently and successfully to roll back the reforms. It is amazing that a small trade school can contribute more to Congress than Harvard or Yale. Must be some restriction in campaign contributions by nonprofit entities. In any case, it is amazing that a relatively-small "investment" in campaign finance -- $1500 through the right channels -- can buy off a Senator or Congressman. Look at the changes made in the 1998 HEA amendments and during the 1999-2008 interregnum. Blurring the definitional differences between IHEs and proprietary schools was a main goal. Eliminating the 50% rule, eliminating the 12-hour rule and muddying the incentive compensation prohibitions have been just as key. Gaining access to funding from other parts of the HEA besides Title IV has been a slower and more gradual process -- but don't count them out yet.

On the other hand, the last major lobbying success from the publics and nonprofits was killing the SPRE program in the mid-1990s -- although that was definitely a big one (states and academic institutions did not want to be held statutorily or financial responsible in any way for loan defaults!). While you can argue that all that the publics and nonprofits have to do is "play defense" in Washington and continue to continue to receive "money for nothing" (no strings, no oversight, no regulation, no responsibilities) through the student aid programs and other parts of the HEA, that would be grossly understating the success that the proprietaries have had in outmaneuvering the publics and nonprofits for nearly two decades.

For goodness' sake they are not only writing the statutes, they are writing most of the regulations. Do you know what negotiated rulemaking is? In most federal programs that have regulations, agencies get to write regulations in the public interest, and the public gets a few weeks or months to comment. In federal student aid, lobbyists receive a formal seat at the table. They wrote this into the HEA in the early 1990s. Does Joe Taxpayer the Citizen get a seat at the table? Nope. But every lobby group with a financial stake in the federal financial aid programs does. The trade school associations and lobby groups have been the most successful.

a) I am actually five years old and just have an amazing knack for writing.

b) Or perhaps you're onto something - you detective you! - in your first sentence. You be the one to figure it out.

Groups like this one are the key. The only way to beat lobbying groups is to be better lobbyists. Students demonstrated and marched to get access to higher ed back in the day. There have been recent riots at Berkeley in CA. Letters and emails are a start but we have tea party members who need to see shouting and screaming on TV news to get scared and back down. I and my friends were willing to put our bodies on the line. That's what it takes.

Warwick, we definitely need to talk about organizing. I'm glad you raised that point again. I've talked about civil disobedience with several of my Board Members, and how we could implement that sort of plan in this day and age. In fact, the young man who made that outstanding short film about my work has inspired me the most when speaking about collective action (http://www.youtube.com/watch?v=ArC6UHatvzY&feature=player_embedded#). If you're interested, you could play a specific role in these plans. We're always looking for more input.

What follows is a bit off-topic, but it's too important to not post:

The announcement on October 28th removed the “safe harbors,” regarding incentive compensation of recruiters.

However, limiting the awarding of incentive payments will be insufficient, as for-profit colleges do not consider pay raises to be "incentive compensation." A representative of DeVry university sent Jessica Finkel a letter, which argued that raises (salary increases) are not incentive compensation, and therefore are not covered by the statute. The letter states, “A 'salary' is 'fixed compensation paid regularly ... for services.' … Finally, an 'incentive' is 'an additional payment (or other remuneration) to employees as a means of increasing output.' ... (emphasis added)” (Slottje 9.) Therefore, statute should actually be strengthened even further, so that schools cannot offer raises based on the number of students admitted, either.

However, even that stipulation would not be enough, as schools can already get past the 2002 statute by using a loop-hole. Instead of monetary incentives, some schools instate student admission quotas and may penalize or terminate the recruiter who does not meet them. Ashford University sets quotas, according to both Tami Barker and Brent Park, former enrollment advisors (Smith; Park 1). It is possible that even after these regulations are put into effect next July, the colleges that once paid admissions representatives based on number of students admitted will simply resort to setting quotas.