Regardless of the critics going after Sen. Harkin, I will continue to applaud him for his recent efforts to combat the for-profits. At least someone on the Hill is fighting for a portion of the indentured educated class. Of course, the problem goes way beyond the for-profits, and that is where Sen. Harkin's focus falls short. The student lending crisis encompasses the non-profits, too. It must also be emphasized that the problem is inter-generational. Of course, it is important to point out that minorities and the poor are the ones who carry the heaviest burden of debt, and they are easily targeted by the for-profits. Sadly, there is another group that these schools are going after: war veterans. There have been several pieces (for example, see here) that discuss war veterans returning from Iraq and Afghanistan, enrolling in for-profits, and finding themselves drowning in a sea of student loan debt.

I was recently in touch with a veteran who attended a non-profit school. While this person was a soldier in Iraq, their loans went into default. This occurred despite their efforts to get in touch with their lender to inform them that they were going to war. These are issues that ought to be investigated by the U.S. Department of Education, and as far as I am aware, no such thing is happening. How can we do this to soldiers who fight for the United States of America? How can we rip off any American who only wishes to better their lives through higher education? Here is yet another sad example of how we've lost our way - American is downgrading itself. Higher education is all about the bucks, and as a result it has become corrupted in the most sickening of ways.

Here's what the veteran had to say:

I was a music major at NMSU during the 2000-2001 academic year. During this period I had no choice but to take out one Stafford loan, and one Perkins loan, totaling about $5500, to cover my tuition and expenses for two semesters. I only had the New Mexico Lottery Scholarship for one semester, and at that time it barely covered half of the tuition, and a $500 a semester music scholarship, plus the minimum Pell Grant. During the Fall 2001 semester I withdrew from school, left the NM Army National Guard, and went into the regular Army, after the events of 9/11.

I somehow had my loans deferred while I spent my first year of service in Korea (2002-2003), I do not remember how. After my year in Korea, I was back in the US, but three months later I was deployed to Iraq(2003-2004). Before I deployed, I contacted NMEAF (the lender, now known as New Mexico Student Loans) and informed them I was going to be deployed to Iraq, and may not be able to make payments. I sent them a copy of my orders, which said I would be gone for 6 months to a year. I informed them I would most likely be deployed for a year. To my surprise 6 months later, I received some mail from my grandfather including a letter from NMEAF that my loans were in default and that the US Department of Education had consolidated them.

I thought this wasn't too big of a deal. When I returned home, I checked on how much I owed. The amount was a lot more than I expected. Apparently one of the loans accrued over a thousand in fees. My total was now roughly $7200. I wonder how much I would have owed had my loans stayed in deferment.

If this war veteran is unable to get out of default, the fees will make the debt astronomical. I've reviewed enough documents and listened to enough stories to know that a reasonable amount of debt can balloon once in default.  And while this amount of debt may seem minuscule by a lot of people's standards, I know of many cases in which similarly small principal balances ran into the tens of thousands (and more) once the default machine was set into motion. 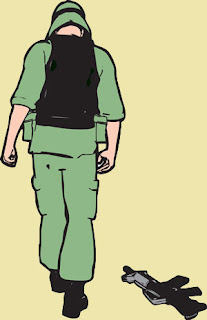 Posted by Cryn Johannsen at 1:57 AM

This gentleman's case is an instance of usury (among many other things too), and legal - because or the institutions' sacrosanct standing.

Welcome Back and Happy New Year!

Thanks, JDpainterguy. I also made the error of rejecting your other comment (I'm still getting used to my new Blackberry). You wrote:

Excellent way to phrase it.

And others are making a lot of money while the Veteran sinks deeper and deeper into debt.

The lenders simply do not care.

And they certainly do not care about the concept of "Higher Education" as an ideal.

Frankly, with the way things are going, why even bother having a US Dept. of Education?

Look at the mess it has made.

Help veterans and all those who have served our country so well find jobs today! Please spread the word. Take 2 minutes and click on our page and use the "Suggest to Friends" button on the left to invite all your friends to help veterans find jobs! www.facebook.com/chooseveterans and www.chooseveterans.com

Thank you for posting this, Cryn! This news is upsetting and sickening. I actually feel like taking the CEO of New Mexico Student Loans and punching his lights out - and then kick him in the head a few more times.

(And the higher education industry apologist pigs wonder why I get upset this subject, and beat up on the $y$tem.)

I am a 14 year vet of the US Army I was in Europe for the first gulf war, and in the chalk for Somalia, and deployed to Bosnia under NATO for the second Gulf. In the crazziness of my career my student loans in the amount of about 13,000 went into default and now I cant get further grants is there any help for me anywhere to get this paid off
Sincerely
Charles B Davis
infantryteacher@yahoo.com