True? 12% of Harvard Business Grad Failing to Repay Their Loans.

So I hear. That's what the wonderful EduBubble recently wrote about. What's worse? Those who went to other business schools (as mentioned in the original article that EduBubble cites)! Also, only 27% of Kaplan students are making their loan payments.

When you think about that paltry percentage and the recent story I wrote, it's beyond cringe worthy. 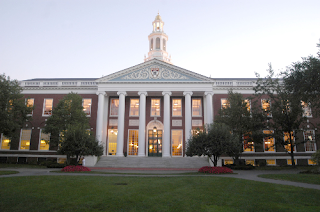 Paltry? It sounds extremely impressive that graduates/dropouts from a particular school have a snapshot repayment rate of 88%.

Don't be confused about the difference between a snapshot and a permanent condition. A repayment rate of 80%, 70% or even 60% means that almost all borrowers will repay their loans within the normal 20yr time-frame (after graduation/dropout). Just because 40% of borrowers have not been repaying during a particular year does not mean they were not repaying the previous year will be doing so in following years. The situations are quite fluid. As the original article notes, reasons that a borrower may not be counting as "repaying" during a particular year may include forbearance, delinquency or making payments that are less than interest. These are all temporary conditions. While some delinquent borrowers will default, most will not. Even out of those who default, many will rehab. The idea that a borrower who misses three payments or is in an unemployment deferment for six months is "doomed" to never make another payment for the rest of her life sounds like an inaccurate and fatalistic/deterministic message to be promoting.

As far as schools where less than 40 or 30 percent are repaying, the situation is far more dire. Many would argue that those schools should be shut down. A vocal minority, though, would argue that the "good schools" simply do not have the capacity, nor the willingness, to pick up all the students who will be shut out of the schools that close down. Their argument would be that the few who find jobs provide a benefit to the nation, while the majority at the "bad schools" who are not paying are simply a cost of doing business to the taxpayer. The response to this would be that maybe the USA is simply putting too many students into attempting postsecondary education. It seems that both political parties, while advocating slightly different approaches, promote an idea that everyone should be able to at least try some postsecondary education. This is probably a bad strategy, but it is hard to argue that we should quash people's dreams. Very few people who start school are thinking to themselves, "I'm going to be one of those who is never going to get a job out of this."

I absolutely agree with you. It seems my language was misleading when I used the term paltry. I was referring to Harvardians, and not the others (especially those who are at for-profits).

I disagree that we should be educating less people. If we go to such a model, say hello to the 19th century again. That's hogwash. We need to rethink the way in which higher education is financed.