It's no surprise to me that Ms. Field has discovered that defaults on student loans are much higher than the federal government has suggested. In her recent report published in The Chronicle of Higher Education, Ms. Field writes, "The share of borrowers who default on their student loans is bigger than the federal government's short-term data suggest, with thousands more facing damaged credit histories and millions more tax dollars being lost in the long run."

NPR's Robert Siegel also spoke to Ms. Field about her recent findings. In that interview, Ms. Field stated that she was "somewhat surprised" by the numbers. But here's my question: why is Ms. Field slightly surprised? It's not the least bit surprising. I've been advocating for the indentured educated class for over a year, and it's quite clear to me that millions of Americans are suffering. Moreover, you have thousands and thousands of Americans who are student loan refugees, living across the globe and therefore not contributing to the well-being and growth of the U.S. economy and so forth. That's just one of many hidden tragedies related to the student lending crisis. There's a name for this one, too. It's called "brain drain." (Of course, I refuse to accept that this larger problem - the crisis itself - will simply remain hidden and therefore a secret. I will continue to fight on behalf of student borrowers until the day I die. Indeed, I will continue to raise awareness in order to convince politicians and policy makers to do something drastic in order to help the indentured educated class).

While it was not the focus of her piece, Ms. Field could have at least mentioned co-signers on these loans. No one has taken co-signers into account. If that data were to be added to these types of stories, the  student loan default rates would be far more devastating. Indeed, when one considers the number of co-signers on these loans (I don't think there's even any data that can show us these numbers), one realizes how this problem is truly of epic proportions. That raises two questions: what are the numbers really at, i.e., how many millions and millions of people are being negatively affected by the student lending crisis? In addition, how much money is the taxpayer losing as a result of these individuals who are defaulting on their student loans?

On the topic of how it is costing other Americans, Ms. Field also brings up the point about how the student lending crisis is costing taxpayers money. In one of my recent posts, I also mentioned this issue of cost. It's commendable that Ms. Field discusses this issue as well, but we desperately need more coverage on the student lending crisis as a whole. For the crisis is not on its way, but rather the crisis has arrived. 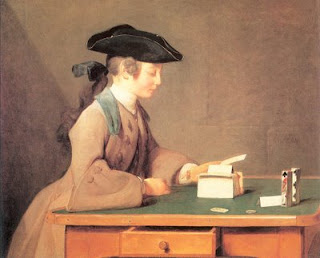 Stop pretending that the cards haven't fallen.
Posted by Cryn Johannsen at 3:34 AM

Hello the way in which Ms Fields addresses this issue is an understatement with passive moods of accentuating the student loan problem. Although I do appreciate the fact she even addressed the student loan crises and as a growing volcano, the fact is, as you state it has arrived and is catastrophic.
The ripple affect is already and will soon ruin hundreds of thousands of decent potential citizens of this country. Im still so distressed by this whole situation. As a cosigner and breast cancer patient it is beyond stressful for me and my hard working daughter who is paying more for her student loan than her rent/utilities & groceries combined. She is educated, responsible & dirt poor but yet has two degrees with only one that cost her this deficit. Its sickening, her story and my story is devastating to us but it only seems, people fault me for signing, people judge her for pursuing a masters on a loan but yet the government (white house) has not committed,condemned,confirmed acknowledgment nor demonstrate a clear agenda to addressing the issue. I am watching and standing behind this not as an audience but as an active participant as part of backing a solution. I hope that others realize this is not going to go away soon its going to be one hell of a fight as not the educated class appears to be geared only for the rich..once again.

Thank you for sharing your painful story. May I share your story here in a post? If you're interested, please reach out to me via email (ccrynjohannsen@gmail.com). I'll be happy to hide your identity, and just share your story. I'm always humbled by these stories - you are the reason why I will never give up fighting for justice. This crisis is an extension of the civil rights movement. Someday it will be fixed. Hopefully that moment will come sooner than later.

of course cryn , you are a voice to be reckoned with!

it is a growing volcano.

The sad part of being in default, with a degree that cannot get you a job in this economy, is that you no longer qualify for almost any financial aid that is tied to federal funding. So how can a defaulter with a nearly useless degree get retrained or re-educated in a field, such as nursing where there is plenty of need, if they cannot receive any federal assistance? Also, since I am in default, in my state, I cannot get a job that is considered part of the state or federal government. Really? Is this smart? I WANT to get out of default, but if I am unemployed how is that going to happen? The job scene here is bad enough without them narrowing it even further. Why can't they come up with some sort of community service type program or something where you 'work' for a certain number of hours and some of your debt is forgiven, or you get to come out of default. There are not enough jobs out there for us to pay these bills, so why not let us work it off in kind. Think of all the good that could be done within our communities through a program like this. We can't all work in Americorps or Teach for America. Right now a debtors options are pay or go into default, which adds massive amounts in fines to your debt. Why not give us another option and have us do some good in the process?

I completely agree with the above post. The current system makes no sense at all and does nothing to help people get out of debt other than putting us into slavery.

I've heard the words "indentured" and "slavery". These may seem severe to some, but it is true. Even your disability check can be docked to pay back these loans!! I have a degree in psychology to pay off and I have been trying to get together enough income for years to try to make payments. I'm not in default yet on my main loan, because I've qualified for deferrments over the years due to health issues and unemployment, but I'm soon going to run out of options. I know I can make some kind of payment, but I'm afraid it may not be enough. If it isn't, they can take my psychology license and then I can't pay anything back. Does that make sense? I'm looking for a lawyer now so I can put in a claim for undue hardship, but that is extremely difficult. I'm relying on my faith to help me with this situation. Cosigner? Yes, my elderly parents cosigned for me. Awful, but I'm praying everyday about this, and taking political action as well. Check out Alan Colinge's book at his website StudentLoanJustice.Org. Tell your story. Contact your congress person. Let's all write to the White House. End the secrecy and the shame and speak out, now!

"Adverse credit is defined in the regulations as the applicant being 90 days or more delinquent on a debt or having been subject in the last five years to a default determination, bankruptcy discharge, foreclosure, repossession, tax lien, wage garnishment or write-off of a federal student aid debt."

Meanwhile, more recent rates of default and delinquency continue to decline (except on the high-risk non-federal loans to trade school students which continue to languish). Makes you wonder whether the "awareness" of the powerful collection tools of the guaranty agencies, federally-guaranteed lenders and collection agencies promulgated by SLJ and others has "backfired" by strengthening and reinforcing the old postsecondary system at all levels. It could also be that the vast majority of students and parents don't borrow more than they can handle (many still don't borrow at all), and the focus should be assisting the minority that has gotten in over its head.

@Anonymous August 8 - I realize the article was about loans that do not include co-signers, and that Ms. Field was focusing on federal loans. I actually discussed this fact with TICAS via Twitter recently. I made the mistake in not being more specific, and will change a few points to make it clear that she was discussing federal loans. I don't think my points, however, regarding co-signers are wrong.