Can we get anything right for hard-working Americans? Anything?

I read these articles far away from home. The most recent one is about double-dip fears and the fact that layoffs are climbing with the deepening housing slump.

These days abroad are unsettling, and it's got me really worrying about the state of our nation. What will it be like in a year? 2 years? A decade? Who else will lose out on opportunities because of the role big money plays in D.C. and on Wall Street?

Just the other day Krugman is claiming that we're in a third Depression. Funny. I thought he was claiming recently that we were in a recovery. I don't get him. That's to say, he's fed all sorts of things by the White House or something. His remarks about this Depression remind me of his writings about the health care bill. At first, he was absolutely against it and went on rants about how bad it was, how it had been essentially watered down (I even heard him in an interview on NPR saying as much), and then in a flash, he's backing the thing. Strange one, that Krugman.

I'm frankly glad as hell to be out of the Beltway. I'm sorry, none of these people get it. You have people who've been out of work for over a year, their unemployment benefits are at risked of being slashed (thanks to an idiotic Congress. I'm sorry. I'm just calling it what it is - friggin' idiotic). On top of that, many of these people are struggling to make ends meet with their loan shark lenders, and everyone here knows by now that the Department of Education could give two hoots about the indentured educated class.  I dare say, this country is runnin' on empty, and it sure as hell doesn't appear that anyone who could make a difference gives a damned. It's a hard thing to watch your country continue to crumble. I was naive in thinking that Pres. Obama meant the things he promised during the election. I've thought quite recently that I'd like to become a politician, because I believe that it means being a good public servant and helping fellow Americans, but I'm so livid at the way in which things are going, I'm not so sure I'll even vote again. It's a damned shame. I still remember the day in which Pres. Obama waved to me before being sworn in. I recall the millions of people in D.C. who showed up, stood in the frigid air, to listen to his inspiring words. It was astonishing to be a part of such a huge group, and only be listening to that man's voice. All of us were silent. Not even a baby cried. And for what? More of the same? It appears to be the case. 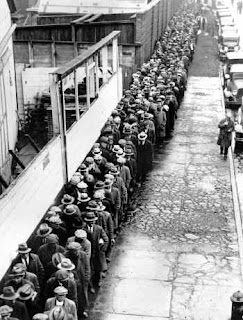 The teenage and twentysomething vote is the sucker vote. You kiss their asses and make them feel important for the first time in their lives, then bend them over and give them a world class pounding. It's like taking candy from a baby.

Is that really true? It wasn't just young people who were suckers.

Obama's administration is one of the greatest disappointments. It has become more of the same politics with a zero-sum mentality.

Government is wrecked. I hope we can salvage it. It's just gone right now.

As they say down in Texas, "Fool me once...shame on...shame on you. Fool me-[twice]-ya can't get fooled again."

Ah, Knut. If you post that quote, you ought to include the clip of Bushy sayin' it. All right, I'll do it. http://www.youtube.com/watch?v=8Ux3DKxxFoM

Obama should only be blamed for his naivete. And the voters who supported him as well. It was simply unrealistic to believe that one administration can "change" Washington or the political process in general. There are simply too many vested interests and constituencies to effect any real substantial change. Thus, we get more of the same.

Anonymous should only be blamed for his naivete.

Ms. Johannsen, you are on the start of a multi-decade movement. Significant education reform will take at least one generation's efforts to achieve. It is on the scale of achieving womens' sufferage.

Even the recent health care and student loan reform took decades to achieve. Just remember that you are running a marathon, not a dash.

For those who don't remember, student loans have been non-dischargeable debt since the 1970s.