Looking Beyond The Garbage: More Drivel About Taking Out Student Loans

Liz Pulliam Weston  over at msn.money has written yet another piece of drivel about taking out student loans. She let's us know that it can be good debt! Ha. In fact, the tone and so-called practical advice reminds me of the trash that Michelle Singletary (et al.) writes  over at the Washington Post. I've taken Ms. Singletary to task on several occasions too (see here and here.)
I don't know about you, but I am fed up with these pieces. In this case, Ms. Pulliam Weston highlights one young woman who owes $242,000 in student loan debt. Oh, and guess what? She's implying that that's out of the norm! Moreover, in response to a recent article that concluded that student loans is the most toxic debt, Ms. Weston says in response, "not quite."
Excuse me for a moment, I need to vomit. Her piece is nauseating.
I'm back.
It makes me wonder if Ms. Pulliam Weston is writing on behalf of the student lending industry. If she's not, she's either (a) out of her mind or (b) failed to do appropriate research on the topic.
In short, this piece is just rubbish, and I let Ms. Pulliam Weston know that too. I encourage you to do the same. Here's how I responded:
You write, "[Said student] approached college with all the confidence, dare I say arrogance, of an 18-year-old who wanted what she wanted when she wanted it." Wow. That's a great way to start off a story about student loan debt. I am sure a lot of your readers were going to be immediately sympathetic to this student's situation.

Shame on you for writing such a thing. A lot of 18-year-olds are confident, but describing her as arrogant is in such poor taste.

Furthermore, your main argument is just flat wrong: taking on ANY debt for a college degree is BAD. I don't care if it's federal or private. DO YOUR RESEARCH BEFORE WRITING THIS DRIVEL.

We need to radically restructure the student lending industry. We also need journalists to take a closer look at the fact that we have a new crisis on our hands - the student lending crisis. We've created an indentured educated class, and you - like many of your mainstream journalist writers and so-called debt counselors - downplay this disaster. Instead of highlighting one case, why don't you do some inventory like the Huff Post has and then write a story about how this crisis is affecting hundreds of thousands of people (if not millions). Let's stop this blame game. It's obvious who's to blame - the student lending industry. They've done a lovely job of making money off of students. It's a shame that nobody wants to hear from the perspective of the debtor.

If we continue to make people take out loans for their education, you can kiss our stance on the global level good-bye.

There is a new clip out about my own work as an advocate. If you are struggling or unable to pay off your student loans, I urge you to get in touch with me. 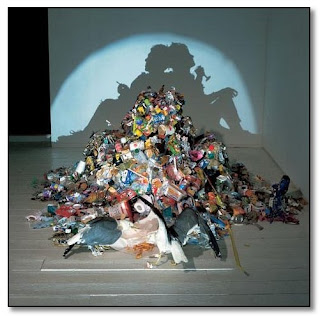 Garbage hides the real truth
Posted by Cryn Johannsen at 6:10 AM

That woman makes me want to pull my hair out. She's considered a very savvy economic adviser and she's spouting out all this crap. It's very misleading.

I have written to her a couple of times about her previous articles. Guess she didn't listen. Lets hope you get through!