I'd love to have a room for a night at the White House, but I am not a Podesta

I hesitate to suggest that Obama's eloquent speeches about the importance of higher education is disingenuous . . . I relate strongly to the stories he tells about his mother being a struggling graduate student from Kansas. (Those are two things I share with her, plus I attended schools where Obama either taught or attended himself). The same institutions that informed the way Obama thinks also played a formidable role in my own intellectual formation. But then I learn that Anthony and Heather Podesta - lobbyists for Sallie Mae - spent the night at the White House. Mr. Podesta claimed that his lobbying efforts failed (see page 2 of this article). However, his wife, Heather, made three additional visits to the Old Executive Office in the White House Complex. Moreover, Anthony Podesta's brother, John, was head of Obama's transition team. I realize these facts are just part of politics. I'm not naive. Nevertheless, it's unsettling information, especially  when I think of the way in which I was inspired by Obama's refrain: "We need real change." From this lowly perspective (plus being crushed by student loan debt), I'm not really seeing any of this so-called "real change," and I know that there are millions of others who agree with me. It leaves me wondering why I bothered canvassing for Mr. Obama. It also leaves me wondering if there is any value in obtaining degrees from the most prestigious universities in this country. 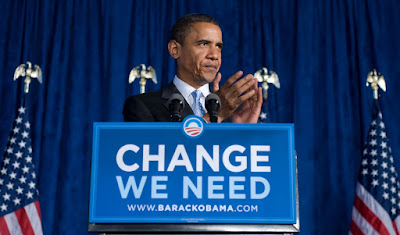 Posted by Cryn Johannsen at 1:03 PM

thanks for this, cryn. i've been having my own struggles with similar feelings regarding our president's plans for "real change." being from illinois and (based upon obama's familial background and upbringing) sincerely believing in the authenticity of his earlier statements about the importance of education, i was very excited at the prospect of "pushing up my sleeves and getting to work" with our country's new leader. since then, i've seen him give heaps of money to greedy corporations that are partially responsible for our current economic problems, make troubling compromises on the very serious healthcare issue, and pass a student loan forgiveness program that will most likely help very few. now he's inviting sallie mae's close friends over for dinner to discuss change, and things just don't seem right at all. i'm not a very smart guy, believe me, but it's easy to clearly see that priorities are being set aside or sacrificed entirely to please the powerful. meanwhile, there are millions of people out there who haven't been to the doctor in years, with a worthless sheepskin and no financial security. this simply can't continue without serious consequences in the next few years.

you and robert really should get a little face time with mr. obama. status, affluence, and connections shouldn't be a requirement when it comes to being heard and considered. if the white house is open and receiving guests of all kinds as the linked article states, he should welcome representatives of the educated poor into his home for a serious conversation about something really important.

Thanks for sharing, Spencer. It would be nice to meet with Mr. Obama as representatives for the educated poor.